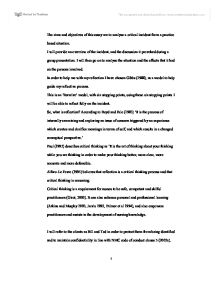 The aims and objectives of this essay are to analyse a critical incident from a practice based situation.

The aims and objectives of this essay are to analyse a critical incident from a practice based situation. I will provide an overview of the incident, and the discussion it provoked during a group presentation. I will then go on to analyse the situation and the effects that it had on the persons involved. In order to help me with my reflection I have chosen Gibbs (1988), as a model to help guide my reflective process. This is an 'Iterative' model, with six stopping points, using these six stopping points I will be able to reflect fully on the incident. So, what is reflection? According to Boyd and Fale (1983) 'It is the process of internally examining and exploring an issue of concern triggered by an experience which creates and clarifies meanings in terms of self, and which results in a changed conceptual perspective.' Paul (1992) describes critical thinking as 'It is the art of thinking about your thinking while you are thinking in order to make your thinking better, more clear, more accurate and more defensible. Alfaro-Le Fevre (1995) believes that reflection is a critical thinking process and that critical thinking is reasoning. Critical thinking is a requirement for nurses to be safe, competent and skilful practitioners (Girot, 2000). ...read more.

I feel that there are a few points here that on reflection should have not taken place or that I should have intervened sooner. As mentioned earlier regarding the roles that people take on, I took on the role as the student nurse, which is often seen as 'under' that of the staff nurse. This caused me not to challenge the staff nurse. This could have also been because as students on short placements you need to be able to adapt and 'fit' in within a team very quickly in order to benefit from the placement. Because of this I was reluctant, as a student to be viewed as a 'troublemaker.' From the start I should have made my thoughts on the situation clear and should have shown more assertiveness. This does not mean to say I would have challenged the nurse in a negative way. I would have perhaps asked if she could explain why I should know such information about the clients Bill and Ted. If there was no justification I could have suggested that maybe it was unfair to disclose such information since it happened many years ago, and that after all these gentleman were quite elderly now and should be able to live their lives without labelling and prejudice. ...read more.

I am now finding it easier to be more assertive but I realise that this is an issue I still need to work on. I have increased my ability to rationalise other peoples, as well as my own values, beliefs and actions. From critical analysis I have learned a lot about my own values and beliefs and now have the ability to question myself on, why I believe? and where my beliefs stem from, and have a greater awareness of my interactions with others, and how I also affect others without imposing my beliefs and values upon them. I have learned that questioning throughout my nursing career, is a fundamental aspect of nursing care, and that this is an ongoing process. As I have progressed through my training I feel that I am becoming more confident and this comes from questioning 'why?' something is done in a certain way and backing it up with theory. I realise that it is not good enough to only take someone's word for why things are done but to question, who says it is more effective and beneficial to carry out the action in this way. I now realise that questioning and answers backed up by theory leads to evidence based practice. ...read more.