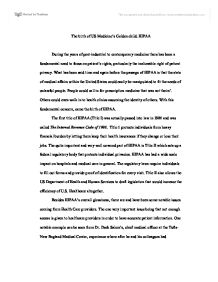 The Birth of US Medicine's Golden Child. The first title of HIPAA (Title I) was actually passed into law in 1986 and was called The Internal Revenue Code of 1986. Title 1 protects individuals from heavy financial burden by letting them keep their health

The birth of US Medicine's Golden child: HIPAA During the years of post-industrial to contemporary medicine there has been a fundamental need to focus on patient's rights, particularly the inalienable right of patient privacy. What has been said time and again before the passage of HIPAA is that the state of medical affairs within the United States could easily be manipulated to fit the needs of unlawful people. People could call in for prescription medicine that was not theirs'. Others could even walk in to health clinics assuming the identity of others. With this fundamental concern, came the birth of HIPAA. The first title of HIPAA (Title I) was actually passed into law in 1986 and was called The Internal Revenue Code of 1986. Title 1 protects individuals from heavy financial burden by letting them keep their health insurances if they change or lose their jobs. The quite important and very well covered part of HIPAA is Title II which sets up a federal regulatory body that protects individual privacies. ...read more.

Because they had no access to any of the forms, Dr. Salem administered multiple antibiotics for 12-15 hours. This, he said, could have caused the patient even more problems if he had gotten an allergic reaction (Stein, A01). Dr. Salem went even further to state that he has yet to meet a doctor who has not had a problem with HIPAA in some way. The problem does not just go to providers, but patients are having some issues. The long monotonous forms that patients have to fill out have become an issue and have been given a reason for crowded waiting areas and the long waits. The problem does not just stop there patients are becoming fed up with repeatedly filling out forms that they have filled out multiple times. Many people see these issues as very irritating, but they all can agree that these issues are relatively mild compared to identity theft and many of the issues HIPAA is protecting patients from. ...read more.

The twentieth century has focused especially on increasing the access to medicine of all individuals within the population, this would include minorities and other underserved populations. With the increase in access, medicine had to conform and it did so through corporatisation and building of several medical facilities. With this came complexity in terms of management. With complexity came, the abuse by certain groups. With this abuse, came the need for reform. Even though patients and providers both have notable issues with HIPAA, perhaps people should rethink their modern situation. The U.S. may need HIPAA now more than ever. Medicine has changed drastically with the 21st century. The change includes increased technology involved within healthcare organization. With this comes increased reliance on the internet and computer software. The 21st century has done many great things in terms of internet technology, but with it, also, comes incredibly talented individuals who can find ways to get into servers and access important information in which they are not supposed to. Even though HIPAA has yet to find a way to effectively control this; without its regulatory laws and defined guidelines, it would have made it just that much easier for individuals to manipulate out healthcare system. ...read more.