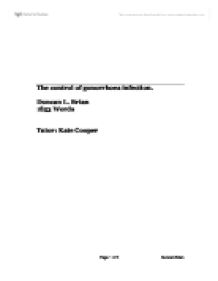 The control of gonorrhoea infection.

The control of gonorrhoea infection. Duncan L. Brian 1853 Words Tutor: Kate Cooper In July 1992, the government launched The Health of the Nation initiative in the form of a white paper.1 Included were specific targets for the reduction in incidence of gonorrhoea by at least 20% by 1995, to no more than 49 new cases per 100,000 men and women aged 15-64. Although this target was achieved ahead of time, the number of new cases was in rapid decline a year before the intervention was announced and continued this trend until 1993 and subsequently levelled out until 1995.2 It was almost inevitable, therefore, that the decline would have continued without intervention. Since 1995, annual increases in uncomplicated gonorrhoea diagnoses in England and Wales have been observed, and despite a plateau between 1997 and 1998, they are continuing to rise.3,4 A substantial increase of 20% occurred in 1996, although no single risk group was associated with this rise.5 Between 1998 and 1999, the estimated overall increase was a staggering 30% in heterosexual men and women.6 Data from 13 London clinics (LGWG) has shown an increase during the same period of 20.4% in men and women across all clinics.7 The relatively low increase in London is probably due to a higher baseline rate of incidence here. ...read more.

Ethnic influences on sexual behaviour are thus a key factor for increased incidence among certain ethnic groups. However, inequalities in access to healthcare services also play a key role in determining incidence in ethnic minority groups, which may be due to the relatively high proportion of underprivileged individuals within these groups. Lack of knowledge or limited access to healthcare facilities may result in a failure to recognise symptoms and an inability to act appropriately thereafter. The suggestion that genetic factors are accountable for the differences between ethnic groups needs to be approached with caution. One such suggestion links an individual's susceptibility to infection to the presence of blood group B phenotype. It has been suggested that there is a higher occurrence among the black population of the group B phenotype than Caucasians and as such are more susceptible to gonococcal infection. Another theory is that certain strains of N. gonorhoeae that are likely to produce an asymptomatic infection are more likely to be found in the white population. However much doubt currently surrounds both of these hypotheses. In London, several factors aforementioned prevail, in particular a high proportion of ethnic minorities and underprivileged individuals. The particularly high population density enhances the risk of transmission through risky sexual behaviour. ...read more.