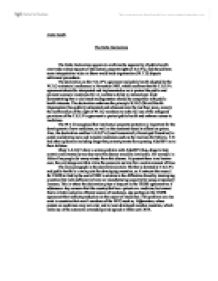 Jamie Leach The Doha Declaration The Doha Declaration appears to confirms the superiority of public health over trade related aspects of intellectual property rights (T.R.I.P's), and should have some interpretative value in future world trade organisation (W.T.O) dispute settlement procedures. The declaration on the T.R.I.P's agreement and public health adopted by the W.T.O ministerial conference in November 2001, which confirms that the T.R.I.P's agreement should be interpreted and implemented so as to protect the public and promote access to medicines for all, marked a divide in international trade demonstrating that a rule based trading system should be compatible with public health interests. ...read more.

The W.T.O recognised that intellectual property protection is important for the development of new medicines, as well as the concerns about its affects on prices. Also, the declaration enables L.E.D.C's (Less Economically Developed Countries) to patent and develop new and valuable medicines such as the vaccines for Malaria, T.B and other epidemics including drugs that prevent parents from passing Aids/HIV on to their children. Many L.E.D.C's have a severe problem with Aids/HIV thus, drugs to help contain and eventually one-day cure this disease would be invaluable. ...read more.

This is where the declaration plays a key part in the TRIPS agreement as it addresses a key concern that the country that has a patent on a medicine, but cannot find a reliable and price efficient source of medicines, due perhaps to the TRIPS agreement that restricts production on the export of medicines. This problem can also exist in countries that aren't members of the WTO such as, Afghanistan, where patents on medicines may not exist, and in least developed member countries, which make use of the automatic extended period agreed at Doha until 2016. ...read more.