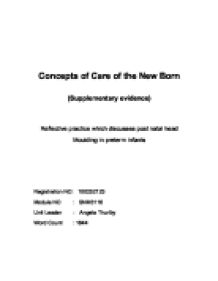 The following reflection will analyse the issue of post natal head moulding which has been observed in practice in very low birth weight (VLBW) infants especially those born at 23-32 weeks gestation.

Concepts of Care of the New Born (Supplementary evidence) Reflective practice which discusses post natal head Moulding in preterm infants Registration NO: 100252125 Module NO : SNM3116 Unit Leader : Angela Thurlby Word Count : 1644 The following reflection will analyse the issue of post natal head moulding which has been observed in practice in very low birth weight (VLBW) infants especially those born at 23-32 weeks gestation. I have also observed that when these infants are ready for discharge this flattened head shape is obvious. Therefore I will analyse the available research on post natal head moulding in order to increase my knowledge. I will also identify ways in which head moulding could be prevented or minimised and hope to create increased awareness among parents and staff of how this could be achieved. Post natal head moulding usually occurs in very low birth weight infants who require ventilation for a long period and who are often restrained by equipment which inhibits normal movements. As a result the shape of the premature infants' head changes in comparison with the term infant becoming increasingly flattened on the sides (Rutter et al 1993). It has also been observed that the sleeping position of infants on their backs for a prolonged time to avoid sudden infant death syndrome has also caused a distinct increase in deformational or positional occiput flattening (Marshal et al 1996; Huang et al 1996; Mulliken1999). ...read more.

Hemmingway and Oliver (1991) state that bilateral head flattening with an lengthened face has been seen to persist to some degree in preterm infants up to 18 years, presenting long-term physical and psychosocial deformities. In my opinion this may have a negative impact to a teenage child whose focus in this period is on his/her general appearance and are worried what other people will think of them. Young (1994) recommended the use of aids such as water pillows, water beds ,air filled mattresses ,doughnut shaped head supports and regular changes in head position to alternate sides in order to prevent bilateral head flattening. The head can be supported to enable occipital lying, when in supine position which according to Cartlidge and Rutter (1988) is the only position which helps to reduce the incidence and severity of head flattening. This can be achieved in practice by using a soft roll or small sheet closely contouring the head whilst ensuring that it is loose enough to provide some mobility (Boxwell 2010). Chan et al (1993) carried out a study to determine the effects of a pressure relief mattress on postnatal head moulding (PHM) in very low birth weight infants .They used 128 infants at 24-36 weeks gestation weighing less than 1500 grams who were without any congenital or acquired anomalies. ...read more.

Conversely, the sample size was too small to detect statistical significance. From these results, it was concluded that head flattening resolves with time. They recommended that although deformity has been shown to resolve with time, the effort to prevent this deformity is paramount. Turril (1992) also explains that, by laying babies on quilts and sheep skins, the pressure of the hard mattress spreads out as the surface contours to the shape of baby rather than the baby conforming to fit the mattress. The effects of head flattening on the physical appearance and psychological development found by Hallsworth (1995) has long term implications for VLBW babies. The use of a soft yielding mattress and gel pillows demonstrated by Rutter et al (1993) and A.A.Schultz (2008) in early weeks of life effectively prevents postural deformity. Recent changes in current practice by incorporating positional changes and use of the available aids is an important consideration. This helped me to view the post natal head moulding with a new perspective and to recommend the use of correct positioning techniques. Nurses should receive further education on how to position babies to prevent the long term problem such as head moulding. I suggest that more research is needed to validate the findings and to discover the ideal surface on which the babies can be nursed in the incubator. This allied with the use of good positioning techniques could help to prevent head moulding becoming a long term problem as the infant grows. ...read more.