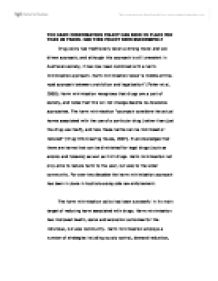 Drug policy has traditionally taken a strong moral and law driven approach, and although this approach is still prevalent in Australian society, it has now been combined with a harm minimisation approach. Harm minimisation takes “a middle-of-the-road approach between prohibition and legalization” (Fisher et al, 2000). Harm minimisation recognises that drugs are a part of society, and notes that this will not change despite no-tolerance approaches. The harm minimisation “approach considers the actual harms associated with the use of a particular drug (rather than just the drug use itself), and how these harms can be minimised or reduced” (Drug Info Clearing House, 2007). It acknowledges that there are harms that can be diminished for legal drugs (such as alcohol and tobacco) as well as illicit drugs. Harm minimisation not only aims to reduce harm to the user, but also to the wider community. For over two decades the harm minimisation approach has been in place in Australia along side law enforcement.

The harm minimisation policy has been successful in its main target of reducing harm associated with drugs. Harm minimisation has improved health, social and economic outcomes for the individual, but also community. Harm minimisation employs a number of strategies including supply control, demand reduction, and harm reduction. Programs established under the harm minimisation policy include methadone programs, needle exchange, safe injecting houses, Cannabis Expiation Notice System, reduction of availability of both legal and illegal drugs, availability to health services, and education. Harm minimisation has not only reduced harm but according to the National Drug Survey (Australian Institute of Health and Welfare cited in Healey, 2005) indicates that there has also been a reduction in illicit drug use, with marijuana amongst teens falling ten percent, and the number of people using amphetamines, marijuana, ecstasy and heroin had fallen 23 percent over three years.

In most Australian states there is a methadone program setup for dependent heroin users in order to minimise their harm. Methadone clinics help to reduce harm as there is no association with drug dealers, reduced crime, less risk of an over dose, no risk of arrest or criminal record, and as it is taken orally rather than by injecting the risks associated with needles disappears. “Methadone is a long acting (more than 24 hours) drug from the opioid class (which includes morphine, pethideine, and codeine, etc.). The pharmacological effects of methadone helps prevent withdrawal, reduces drug hunger and in adequate amounts, blocks the euphoric effects of heroin and other opioids” (Reilly). Because Methadone is so long lasting it gives clients a chance to get their lives back on track, as they are bow no longer spending the majority of their time searching for either a fix itself or the funds to score. As clients have to attend the clinic it also allows workers at the clinic to monitor their health and gives them “a point of referral if further treatment is required” (Healey, 2005). This program does not suit every heroin addict as it is monitored and so regimented, it also doesn’t take into account the side effects of the drug (methadone) or the environmental factors of a users’ high. Overall it has been a successful program with over 10,000 people attending methadone clinics in New South Wales alone (Riley).

The Cannabis Expiation Notice System, or CENS, refers to a policy that has been implemented in some Australian states (including the Australian Capital Territory and South Australia). This program reduces harm for those caught using or possessing cannabis. Instead of a criminal record and jail time CENS redirects offenders away from the courts by issuing them with a hefty fine, in South Australia fines are up to $150.00 (Lenton et al. 1999), much like the ones received for traffic offences. This reduces harm in the long run as sometimes people DO make mistakes when they are young, and by not receiving a criminal record it does not hinder any future job hopes or prospects, for example teaching. Also by diverting offenders away from jail time it reduces exposure to more criminal behaviour which they would most definitely encounter during time in prison, beyond this it also has the potential for the individual to have improved health due to the risk of mortality or morbidity in jail, and finally gives the offender a chance to get back on track with life.

Educating those already involved with drugs is important, but educating the youth about harm minimisation before they stray from the laws is imperative. Programs designed for school students are a great way to tackle the issues before a dependence on drugs is established. It not only tackles the issue of the possibility prevention but talks about ways to minimise harm if students still wish to experiment with drugs and alcohol. Rethinking Drinking is an Australian Government Initiative that endeavours to minimise the harms of alcohol amongst teenagers. The motto of this program is “YOU’RE IN CONTROL”, and throughout the course of the program it looks at issues such as peer pressure, influences, harms and myths, effects of alcohol, alcohol and culture, Blood Alcohol Concentration (BAC) and standard drinks, alcohol and sport, partying safe, risks of drinking alcohol, and sexual harms associated with alcohol (Rethinking Drinking, 2004). This project aims were to

This program “focuses on the drinker, the drinker’s friends and family, [and] the wider community” (Rethinking Drinking, 2004). This program acknowledges that drinking alcohol does occur in teenagers, but also that to severely reduce harm abstinence is an acceptable option. The Australian Government Department of Education, Science and Training have produced a Rethinking Drinking resource kit that features a classroom program for the teacher, a student work book, A brochure for parents entitled ‘Alcohol and your child: Helpful information for parents, families and the community’, a CD-Rom (with digital copies of the student work book and parents brochure), and a video cassette featuring social scenarios involving alcohol use, as well as short interviews of peoples views on how minimise potential harms associated with drinking. Educating the youth is an important strategy to not take the issues of past generations into the future.

Availability and supply of drugs “is a key measure to reduce the harm associated with alcohol [and drug] misuse in Australia” (Alcohol and other drug council of Australia, 2003). This strategy can be seen through both legal and illegal drugs. Supply control for legal drugs can been seen with the age restrictions in place for both cigarettes and alcohol, and although this does not rule out the possibility of minors obtaining these drugs it does make it more difficult. There has been a crackdown on businesses supplying alcohol and tobacco to minors, with businesses at risk of losing their licences to sell these products. There are spot tests carried out to determine if businesses are following and checking consumers’ identification. This is a deterrent for not only minors' as it is difficult to obtain these drugs, but also for the business owner as if they lose their liquor or tobacco licence their profits will plummet. By making these drugs harder for minors to acquire it limits the amount of these drugs in the hands of underage consumers and thus reduces the harm.

‘Zero Tolerance’ or prohibition is a harm maximiser. By introducing prohibition harm to the individual drug user and the community greatly increases. Prohibition causes drug dealing to go underground forcing more people into the drug ring by introducing runners as a precaution for dealers, and also by making the user to enter unfamiliar environments in which an overdose is more likely. Due to the fear of being caught many users may also be on edge and nervous while injecting possibly causing them to not only overdose, but also to cause harm by attempting to inject more rapidly, and to share or use unclean needles. ‘zero tolerance’ also encourages a higher crime rate due to not only increased arrests in relation to drug use, possession, cultivation, trafficking and conspiracy, but also in terms of break-in and robbery rates by users in response to the price of drugs being increased (due to less product and high demand).

‘Zero tolerance’ is wishful thinking, an unachievable dream. Harm minimisation is a realistic approach that has proven successful in today’s society. Harm minimisation acknowledges the prevalence of drugs in society and encourages users to minimise risks of harm where they an. The harm minimisation policy by no means supports the use of drugs, but at the same time does not condone it, instead it focuses rather on the reduction of the harms involved. Harm minimisation employs a number of strategies including supply control, demand reduction, and harm reduction. Programs established under the harm minimisation policy include methadone programs, needle exchange, safe injecting houses, Cannabis Expiation Notice System, reduction of availability of both legal and illegal drugs, availability to health services, and education. It is through these strategies and programs that not only harms to the user and the community (in relation to drug) have significantly been reduced, but the National Drug Survey (Australian Institute of Health and Welfare cited in Healey, 2005) indicates that there has also been a reduction in illicit drug use.