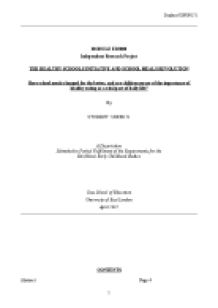 THE HEALTHY SCHOOLS INITIATIVE AND SCHOOL MEALS REVOLUTION Have school meals changed for the better, and are children aware of the importance of healthy eating as a vital part of daily life?

The answers required individual, personal opinions which quantitative methods do not allow for. Quantitative researchers test hypotheses as opposed to investigate societal questions and issues, (Filmer 1972 as cited in Silverman 2000), regarding quantitative methodologies as a positivist approach, whereby theories are tested in an attempt to ameliorate predictive knowledge of a phenomenon. In agreement with this, Orlikowski & Baroudi (1991 cited in Myers 1997) categorised research as positivist in nature where there were propositions, measurable covariants, testing of hypotheses, and gathering logical thought regarding phenomena from a sample to stated populous. Nonetheless most quantitative researchers debate this suggestion, as they do not intend to create scientific laws, moreover uncover generalisations by collating relevant data. SECTION 4 QUESTIONNAIRE RESULTS AND ANALYSES 4.1 Key Stage One Questionnaires The questionnaires were distributed to class teachers, who carried out a discussion with the children who regularly eat school meals. This data is qualitative, in that there are no real statistics owing to the small numbers of participants. However, there are many valuable opinions of the children, and all seemed very enthusiastic about their school dinners! Asked if they enjoyed school dinners, answers from years Reception, 1 and 2 was a resounding ?yes?. This was also the same response when asked if they found adequate choice on the menu of what they like to eat. The children were asked what they enjoyed the most about school meals. Answers were recorded by the teachers using key words throughout the discussion. This data was largely unsuitable for tabulation, as there were so many answers, and few duplicates. Answers given for this question include: Specific meals ? such as Fish and Chip Fridays or Roast Chicken on a Wednesday Enjoyable Pudding/Desserts Enjoying a hot meal ?Yummy? Main Courses A couple of the answers were interesting in so much as one pupil commented on how their favourite aspect of the school meals was ?sitting with their friends?, suggesting enjoyment of the social aspect ? an agreeing point raised by Turner et al, and Ross in their 1995 studies. ...read more.

SECTION 6 RECOMMENDATIONS FOR FURTHER RESEARCH Scope for further research would be to ascertain where children acquire knowledge of health and nutrition, and also the worth they put on this information. It could also be a useful element to additional research to gauge the eating habits of the same children in their home environment. This would allow researchers a holistic picture of eating habits, and whether the health education children receive is a knowledge shared by their parents. This study could further develop by comparison of not only food, but also physical activity both in and away from the school setting, completing the picture of health and well-being. Certainly if the study were to be replicated, it would be more useful to enlist a broader range of schools, perhaps including both rural and urban. Although this would be more costly in terms of time and may require a different approach ? such as conducting interviews with children (adhering to much stricter ethical issues and gaining required consent) and observing a meal service in the different schools. This would give a more accurate picture of today?s meal systems and opinions rather than using a single school. If questionnaires were used, it would be advantageous to use multiple choice options, rather than leaving questions open to opinion. This would allow a clearer analysis of answers, and hopefully deter children from missing out questions through lack of understanding, or not feeling able to express themselves properly. Teaching staff and other professionals should be aware of the growing preponderance of behaviour and habits which are damaging to children?s well-being, and through lessons and health education must understand the perspectives held by children regarding their health. They must develop knowledge through a wide range of activities and scientific concepts through the Primary School journey. Children should be given the chance to gain appropriate skills and knowledge through which they will make sustained and positive decisions regarding their own well-being and taking responsibility for their own actions. ...read more.

There are occasions when key terms need to be defined - key stage 2 for instance.
Some of the research cited dates back to 1991; more recent material is available and should be cited.
There is mention of government policies early on in the dissertation, but the writer should reference these policies more specifically.
It is not clear why the student chose to use questionnaires as opposed to interviews or a focus group. It is important to show why other potentially viable methods were not used as this demonstrates mastery of research at undergraduate level. It is pleasing to see, however, some evidence of consideration of the pros and cons of using questionnaires.
Details about how the school, and the school children, were chosen would have been useful in terms of comparing results with those schools previously researched by others.
The view sought from the Head elicited a positive response, but it could be argued that the Head was biased