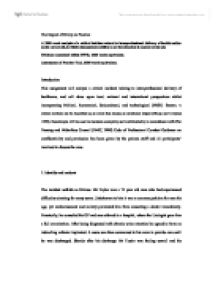 The Impact of Policy on Practice-analysis of a critical incident related to interprofessional delivery of health and/or social care (LO3,4) which demonstrates ability to set the situation in context (LOs 1,2) Evidence contained within PPPD

The Impact of Policy on Practice A 3000 word analysis of a critical incident related to interprofessional delivery of health and/or social care (LO3,4) which demonstrates ability to set the situation in context (LOs 1,2) Evidence contained within PPPD, 1000 words equivalent. Assessment of Practice Tool, 1000 words equivalent. Introduction This assignment will analyse a critical incident relating to inter-professional delivery of healthcare, and will draw upon local, national and international perspectives whilst incorporating Political, Economical, Sociocultural, and technological (PEST) factors. A critical incident can be described as an event that creates an emotional impact (Ghaye and Lillyman 1999). Pseudonyms will be used to maintain anonymity and confidentiality in accordance with The Nursing and Midwifery Council (NMC, 2008) Code of Professional Conduct Guidance on confidentiality and permission has been given by the patient, staff and all participants' involved to discuss the case. 1. Identify and incident The incident unfolds as follows. Mr Taylor was a 75 year old man who had experienced difficulty urinating for many years. Unbeknown to him it was a common problem for men his age, yet embarrassment and naivety prevented him from consulting a doctor immediately. Eventually, he consulted his GP and was referred to a hospital, where the Urologist gave him a full examination. After being diagnosed with chronic urine retention he agreed to have an indwelling catheter implanted. A nurse was then summoned to his room to provide care until he was discharged. Shortly after his discharge Mr Taylor was feeling unwell and his experience soon became critical when he could not relieve himself without experiencing a burning sensation and pus and some bleeding was present. His wife was forced to call Sarah, the district nurse, who visited Mr Taylor to determine the nature and severity of his pain. Mr Taylor's examination revealed infection and so it was necessary to change his catheter. After doing so Sarah relayed her findings and decision to change his catheter to his GP who instructed treatment. ...read more.

This RCN document looks at the key roles of nurses examining their potential influence on continence services - whether in a hospital or the community setting and the impact of the Government's new initiatives (RCN 2006). It is a common problem in most societies for to ones intimate problems private. However incontinence is a private matter which must be revealed and many suffers find difficulty in doing so. The problem here is that it inhibits hospital aims to tackle such issues at the earliest stage to prevent infection or critical illness. Policies may be used to address this issue by first identifying reasons for patient silence. The feminist argument that females are disadvantaged by the lack of female GPs- with whom they will feel most comfortable confiding in, may also apply to males in most societies. Not only do statistics suggest that men are less willing to discuss illnesses, but they may feel uncomfortable around carers, who are predominately women. The legal right to privacy should be fully incorporated in home visiting policies, giving patients a right to request GP or nurse with the same sex as themselves and to avoid cases like Rodney Ledward- A gynaecologist who violated a number of patients. Religious views- notably Jehovah Witnesses may also lead people to refrain for engaging in medi-care which involve surgery and utilisation of manmade implants such as catheters. Another reason for delayed consultation may be due to deprivation. Marxists draw upon social and economic deprivation- underclass upbringing may lead to a lesser awareness about medi-care and the heavy reliance on NHS as opposed to the interpersonal care generally offered by private hospitals. Therefore there should be increased publication about the illness to break down the embarrassing stigmas and to demonstrate the negative consequence of delayed consultations. Economical. For many years government initiatives and NHS policies have considered the central role of a nurse to be to deliver high quality appropriate care to patients, within a variety of care settings. ...read more.