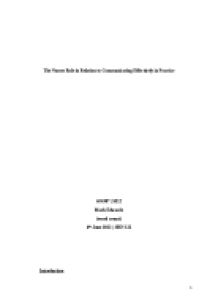 The Nurses Role in Relation to Communicating Effectively in Practice

﻿The Nurses Role in Relation to Communicating Effectively in Practice 654307 | M12 Mark Edwards (word count) 6th June 2012 | SHN 122 Introduction The aim of this essay is to consider how the nurse?s role is effective in relation to communicating in practice. I will investigate the definition of communication and its theories as well as the facilitators and barriers to effective communication, using journals and texts to support the validity of these theories. Included within this assignment will be an example from clinical practice describing a specific event and the types of communication relating to the interaction. In order to maintain confidentiality in accordance with the Nursing and Midwifery Council (NMC 2008) Code of Professional Conduct, all names and locations have been changed. The NMC (2011) state that information about a client should be treated as confidential and only used for the purpose for which it was given. For the purposes of this scenario, the patient will be named as Betty. As a result of this essay, knowledge should be gained regarding the establishment and maintenance of valuable interpersonal skills. An accomplished insight into the facilitators and barriers to effective communication should be achieved, in turn benefiting myself for future interactions in practice, and ultimately, ensuring improved holistic care for patients. Communication is a difficult concept to define, described by Anderson (1959) ...read more.

There are tests of cognitive function for patients who may be suffering with dementia, the most common being the Mini Mental State Examination (MMSE) (Rutherford, 2004). It is from researching the recall section of the MMSE that I decided to test Betty. Betty did not instigate any form of conversation herself whilst eating so I asked her some basic questions to gauge how much she could interact with me. Very quickly I noticed that Betty would echo what I had said or asked her, as if she had learned responses prepared. An example of this would be when upon hearing Bob Dylan on the television, I asked her if she liked him. ?I like him?, was her response. After telling her that I had seen him live and he was amazing, she responded with, ?He is amazing?. Similarly, when enquiring how her dinner, pudding and drink tasted, the response was always the same; ?it?s lovely?. Commonly used phrases seemed to come freely, perhaps this was a device Betty had assumed in order to cope in social situations. Jargon and slang are known as sub languages (Aquino, 2008). That is, a language only known by specific groups of people. For example, I could have said ?That?s cool? to Betty, meaning that I liked something, whereas an individual of an older generation will see it as a reference to the temperature of something. ...read more.

A patient with more needs such as Betty would require more time by staff. Results of the study show that in these cases, nurses would simply avoid direct contact with the patient. This shows a lack of self-awareness by the nurse and may negatively influence the patient. Effective communication can be blocked if the patient has a sight or hearing problem. In this instance, Betty has impaired vision. This would stop Betty from correctly receiving my expression visually. To help overcome this issue, I can assist in many ways. To start with I asked Betty how well she could see me; thus providing me with an honest guide of how good her vision is. I learned that I was visible but not in any detail. Additionally, when agreeing or confirming anything with Betty I used spoken language rather than just a nod, as she may have not seen it. Alongside ensuring I was visible to Betty, I was aware not to allow for too much silence in our interaction. Certain kinds of silence can communicate an understanding or approval of some sort. Conversely, silence could indicate a misunderstanding or confusion, resulting in an uncomfortable situation for the patient (Riggio and Feldman, 2005). -Judgemental responses -Sterotyping Self awareness Non verbal ? posture, facial expression etc Conclusion what have I learned/achieved/will implement in the future? Quote codes of conduct etc Reflecting on my time with Betty I was surprisingly aware of the ways in which I was communicating with her. ...read more.