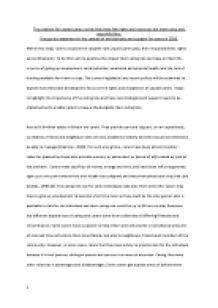 The problem for unpaid carers is that they have few rights and resources but many roles and responsibilities. Discuss this statement in the context of entitlements and support for carers.

﻿The problem for unpaid carers is that they have few rights and resources but many roles and responsibilities. Discuss this statement in the context of entitlements and support for carers in 2010. Within this essay I aim to explore the valuable role unpaid carers play, their responsibilities, rights and entitlements. To do this I aim to examine the impact their caring role can have on their life, in terms of giving up employment, social activities, emotional and physical health and the lack of funding available for them to cope. The current legislation and recent polices will be examined to explore how they have developed to focus on the rights and recognition of unpaid carers. I hope to highlight the importance of the caring role and how new strategies and support needs to be implemented to enable carers to have a life alongside their caring role. Around 6.8million adults in Britain are carers. They provide care and support, on an unpaid basis, to relatives, friends and neighbours who are sick, disabled or elderly and who would not otherwise be able to manage (Brammer, 2010). For such a long time, carers have been almost invisible ? taken for granted by those who provide services, or patronised, or (worst of all) treated as ?part of the problem?. Carers make sacrifices of money, energy and time, and have been left unsupported, right up to the point where their own health has collapsed and they themselves have required care (Jordan, 1990:26). The caring role can for some individuals take over their entire life. Carers may have to give up employment to become a full time carer as they could be the only person who is available to care for the individual and their caring role could be up to 24 hours a day. Everyone has different experiences of caring and carers come from a diversity of differing lifestyles and circumstances. ...read more.

Carers have many roles and responsibilities, finding the time to manage accounts and income can be very challenging and daunting for many people. Help and support should be provided to ensure they are receiving the correct benefits at the right level. Income support may be available for individuals who do not have to sign on for job seekers allowance. Working tax credits may be available for individuals who carry on working. Council tax reductions and possible exemptions may be available. The money carers receive often enables them to take time out of their caring role and have some time to themselves. Carers should be offered as much financial support as necessary to enable them to have as ?normal? life as possible, as well as looking after the person they care for. If they do not take care of themselves how are they able to continue to care for someone else? The government recognised this and has devised strategies for future plans around unpaid carers which will aim to be in force by 2018. Which raises further questions why has this not been a primary concern before and strategies put in place to ensure carers are a main priority? Carers have been made a prime focus in recent strategies, but in the past even though there has been numerous research projects (primarily around carers? experiences) which has highlighted the lack of support they received, it has still taken until now before their wishes and needs have been fully recognised. Getting assessed by the local authority social services department enables carers and the people they care for to gain access to the help and support they need. Two assessments may be carried out: a community care assessment of the needs of the person being cared for, as well as a separate assessment of the carers needs. Community care assessments are carried out on the individual if it appears they may be in need of community care services. ...read more.

conditions of the individual they care for, in easy to understand terminology, to have someone to speak to about their own emotional and physical needs, an income which covers the cost of caring, not pushing them into poverty. In some circumstances the carer will have had to give up work to care for the individual (Jordan, 1990:23). This list shows that carers do a valuable job on a shared, not contractual basis; they ask the rest of society to recognise their needs, rather than demand a series of rights (Jordan, 1990:23). In conclusion carers play a valuable role in society and have many roles and responsibilities. There have been developments in the help and support they require. However, it still proving not to be adequate. I feel the support they require from services, which will enable them to have a life alongside their caring role is also inadequate. Research highlights that carer?s centres and support groups have been forced to close down due to the lack of funding available. I feel more funding needs to be provided to the voluntary sector, which will allow them to open more local services and offer help and support to carers who require it. The visions which the government hope to implement by 2018 I feel are overdue. Carers should have been a main priority a long time ago and these visions should already be in place to fully support and empower carers. The Report of the Standing Commission on Carers (2007-2009) highlighted 68% of carers provided care for up to 19 hours per week, 11% for 20-49 hours and 21% for 50 or more hours. A commitment needs to be made to carers to ensure that their wants and needs will be placed at the centre of any major changes and campaigns. Carers need to be given more choice and control over their lives and are empowered to have a life outside caring (National Carers Strategy, 2008). Reference list: Brammer, A (2010) Social Work Law: 3rd edition. ...read more.

This essay aims to discuss the demanding responsibilities carers have in the context of limited rights. It is well-researched and the appropriate details are present: numbers of carers in the UK, relevant law and policy. However regarding the latter, there isscope to actually name a few more policy documents relating to the topic.
The writer also needs to ensure that s/he is clear about the fact that direct payments can be used to pay for social care, rather than just in place of social care. The legal instrument that introduced direct payments could have been referred to. This shows that the writer is knowledgeable about the area.
Nevertheless, on the whole the essay question is addressed well. Referencing is excellent and the writing style is good.
4/5