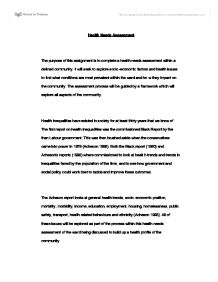 The purpose of this assignment is to complete a health needs assessment within a defined community. It will seek to explore socio-economic factors and health issues. The community is a small town in the North of England with a geographical area approx 9 s

Health Needs Assessment The purpose of this assignment is to complete a health needs assessment within a defined community. It will seek to explore socio-economic factors and health issues to find what conditions are most prevalent within the ward and how they impact on the community. The assessment process will be guided by a framework which will explore all aspects of the community. Health inequalities have existed in society for at least thirty years that we know of. The first report on health inequalities was the commissioned Black Report by the then Labour government. This was then brushed aside when the conservatives came into power in 1979 (Acheson 1998). Both the Black report (1980) and Acheson's reports (1998) where commissioned to look at health trends and trends in inequalities faced by the population of the time, and to see how government and social policy could work best to tackle and improve these outcomes. The Acheson report looks at general health trends, socio-economic position, mortality, morbidity, income, education, employment, housing, homelessness, public safety, transport, health related behaviours and ethnicity (Acheson 1998). All of these issues will be explored as part of the process within this health needs assessment of the ward being discussed to build up a health profile of the community. What is health? ' [Health is] the extent to which an individual or group is able on the one hand, to realise aspirations and satisfy needs and on the other hand to change or cope with the environment. Health is therefore seen as a resource for everyday life, not the object of living: it is a positive concept emphasising social and personal resources as well as physical capabilities...' (WHO 1984) National Institute of Clinical excellence (Nice 2005) define a health needs assessment as '..a systematic method for reviewing health issues facing a population, leading to agreed priories and resource allocation that will improve health and reduce health inequalities' The framework used to complete this health needs assessment is based on guidance published by NICE (2005) ...read more.

In 2003-2005 deaths by lung cancer in the district was 5% higher than anywhere else in England and of all deaths by cancer, Lung cancer accounts for more than 60% of all respiratory diseases in woman. The figure for men is on average 10% lower accounting for an average 50% of all respiratory diseases in men (STPCT 2006/07). Chronic obstructive pulmonary disease (COPD) prevalence is highest in the district by 0.4%, as well as being 1.37% higher than the national average (STPCT 2006/07). Asthma is another area the district's prevalence is higher (0.33) although a sister district does have a higher prevalence of 0.56% (STPCT 2006/07). As with the other respiratory problems it appears the north east far out weights the rest of England for prevalence of these diseases. Is there a gap in service provision here or could more be done locally to resolve these issues. The ward has a significantly lower rate of low birth weight babies (STPCT 2006/07) this is a common occurrence throughout the north east. Smoking whilst pregnant is known to increase the chances of having a lower birth weight baby (NICE 2008) The prevalence of smoking ranks it among the worst 20% of wards in England with the highest proportion of smokers, with 23% of the districts women smoking throughout their pregnancy (STPCT 2006/07). The number of girls aged 10-15 years old in the district who smoke is 3% higher than the national average, yet the number of boys aged 10-15 years old who smoke is 1% lower than the national average (STPCT 2006/07). Binge drinking was also ranked within the worst 20% of wards in England with the highest proportion of individuals who binge drink weekly. Mental health Prevalence of depression in the ward was ranked among the best 10.5-21% of wards (STPCT 2006/07). People of the district received more incapacity benefit for mental health/behaviour disorders than in any other district within England (STPCT 2006/07. ...read more.

From 1 year onward it becomes harder to target this population group as the health visitor visits less frequently. Children are at an influential stage in their life. Less exposure to smoking could potentially reduce the risk of them becoming smokers in later life. 'If a child's parents smoke they are three times more likely to smoke themselves', (Cancer Research UK 2004). Potential places where parents or carers could be targeted are baby days (formally baby clinics), children's centre ran groups and parent and toddler groups. Would a separate initiation need to be set up to target those who do not access these groups or this initiation be enough to target these parents and carers. One proposal would be smoking cessation coffee mornings with the addition of a cr�che within an appropriate setting accessible to all. The next step of the NICE framework is to look specifically at interventions, policies and strategies then to implement and evaluate there effectiveness. Due to time and word constraint it is not possible to undertake these steps at present. This assignment was based on a health needs assessment. Had I worked in the community and known my population longer I may have undertaken a focused needs assessment. From this health needs assessment I feel I have learnt a lot about my community and services it provides. I now feel I have a greater understanding when talking to clients about how they must feel isolated and detached from the cities services due to education, work and health provision. What is clear for this assessment is how deprived the ward is and how deprived the district is as a whole. The biggest indicators are the smoking prevalence, death by CVA, CHD and cancers and both childhood and adult obesity . It is worth remembering that these figures are based on census data collected in 2001 and 2004. The population may have changed seeing an increase in migration from other countries as well as asylum seekers taking refuse, which in turn brings about new cultural health needs and problems. ...read more.

A good piece of work analysing the health needs of a particular area. Statistics were used to analyse the areas of concern but there was a need to use more recent information to help better inform the assessment. It was not clear why recent statistics were not available. Public health departments of local authorities/councils should be able to provide these. The writer should also explain the difference between the two different types of assessment.
There were several spelling & grammatical errors which could be minimised by careful proof-reading. Remember to write out acronyms in full on first citation.
4/5