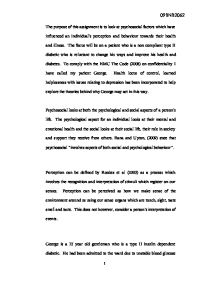 The purpose of this assignment is to look at psychosocial factors which have influenced an individuals perception and behaviour towards their health and illness. The focus will be on a patient who is a non compliant type II diabetic who is reluct

The purpose of this assignment is to look at psychosocial factors which have influenced an individual's perception and behaviour towards their health and illness. The focus will be on a patient who is a non compliant type II diabetic who is reluctant to change his ways and improve his health and diabetes. To comply with the NMC The Code (2008) on confidentiality I have called my patient George. Health locus of control, learned helplessness with issues relating to depression has been incorporated to help explore the theories behind why George may act in this way. Psychosocial looks at both the psychological and social aspects of a person's life. The psychological aspect for an individual looks at their mental and emotional health and the social looks at their social life, their role in society and support they receive from others. Rana and Upton, (2009) state that psychosocial "involves aspects of both social and psychological behaviour". Perception can be defined by Rookes et al (2000) as a process which involves the recognition and interpretation of stimuli which register on our senses. Perception can be perceived as how we make sense of the environment around us using our sense organs which are touch, sight, taste smell and taste. This does not however, consider a person's interpretation of events. George is a 75 year old gentleman who is a type II insulin dependent diabetic. He had been admitted to the ward due to unstable blood glucose levels due to being noncompliant with his medications and diet. He has daily visits from the district nurse to check and re-dress his leg ulcers and to monitor his blood glucose levels. ...read more.

Learned helplessness can have principle characteristics of depression and is a learned behaviour. When a person is placed in a situation where a particular outcome is or appears to be independent of his responses, he learns that his responses are ineffective. The affected individual may conclude that any responses he makes will be powerless to affect the outcome. The helpless subject may progress through successive stages of fear and anxiety to a deep depression. Learned helplessness also affects other psychological processes: motivation is reduced with no incentive to try new coping responses. Cognition and inability to learn new responses to overcome prior learning that trauma is uncontrollable and emotion, the helpless state which resembles depression. Seligman (1975). Other characteristics similar to depression are lack of positivity; creativity and healthy self image. Lack of motivation will cause feelings of hopelessness believing that they are incapable of doing better and feeling inadequate can all lead to depression and are all related to learned helplessness. George may be a person who has always been in control of his life and since becoming diabetic and suffering with leg ulcers George maybe more angry and frustrated as he needs more help from health professionals as his health is beyond his control. George may have tried controlling his diabetes but if was not having the effect he required may have become depressed which then led to learned helplessness, if George could not help himself then allowed the district nurses to deal with it. "Learned helplessness is the giving-up reaction, the quitting response that follows from the belief that whatever you do doesn't matter." ...read more.