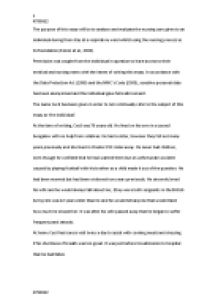 ﻿4799062 The purpose of this essay will be to analyse and evaluate the nursing care given to an individual during their stay at a respiratory ward whilst using the nursing process as its foundation (Kozier at al., 2008). Permission was sought from the individual in question to have access to their medical and nursing notes with the intent of writing this essay. In accordance with the Data Protection Act (1998) and the NMC?s Code (2008), sensitive personal data has been anonymised and the individual gave full valid consent. The name Cecil has been given in order to not continually refer to the subject of this essay as ?the individual?. At the time of writing, Cecil was 76 years old. He lived on his own in a council bungalow with no help from relatives. He had a sister, however they fell out many years previously and she lived in Chester 150 miles away. He never had children, even though he confided that he had wanted them but an unfortunate accident caused by playing football with his brother as a child made it out of the question. He had been married but had been widowed two years previously. He sincerely loved his wife and he would always talk about her, (they were both sergeants in the British Army) she was 12 years older than he and he would tell anyone that would listen how much he missed her. It was after his wife passed away that he began to suffer frequent panic attacks. At home Cecil had carers visit twice a day to assist with cooking meals and dressing if his shortness of breath was too great. It was just before his admission to hospital that he had fallen. Primarily Cecil was admitted to the accident and emergency department presenting shortness of breath and low oxygen saturations in his blood. His immediate concern was the panic he felt over the shortness of breath and the effort it took to breathe. ...read more.

and so he would stand. Another complicating factor for risk of falls and postural hypotension was that Cecil was taking the drug furosemide intra-venously to relieve breathlessness caused by COPD. One side effect of furosemide is postural hypotension (BNF, 2011) and for that reason it was not administered to him if his systolic blood pressure was below 100 mmHg. Due to Cecil?s high falls risk, it was planned and implemented that in order to avoid future falls and to help his unstable gait, nurses encouraged Cecil to use his call bell to make them aware of his needs. It was ensured that all personal items were within reach and he was also referred to the physiotherapist linked to ward, whom he jokingly referred to as ?physio-terrorists? because of memories of physiotherapists in his Army days. The physiotherapists assessed Cecil using the Elderly Mobility Scale (EMS) which gauges how well he could mobilise in different scenarios such as sitting to standing and timed walks. It is scored out of a maximum of twenty and Cecil scored eighteen. The tool?s interpretation of this score was that Cecil was able to manoeuvre safely and was independent. However it is easily argued that due to Cecil?s postural hypotension he would still need assistance and observation. When it came to assisting him with his toileting needs, the level of assistance was determined by asking him how breathless he felt and by either helping him to stand with verbal encouragement and guidance so he could urinate or by delivering a commode to him. As previously mentioned, Cecil had already experienced a fall at home. It was ensured that Cecil was placed in the bay closest to the corridor which ran down the ward so he could be seen at all times. Again, he was told to use the call bell, his personal items were within reach and he was referred to the physiotherapists to help gain independence with his mobility once more. ...read more.

It should have been made absolutely clear to Cecil the importance and benefits of wearing his oxygen mask. Unfortunately, due to Cecil?s family situation (there was no family), nurses and other professionals were not able to explain to relatives or carers of Cecil who may possibly have put it terms that Cecil could better understand. On the other hand the MDT should have taken note of this and made communication with Cecil as understandable as possible. Cecil?s care was chosen to be the basis of this nursing care study because it is the writer?s personal view that it very much demonstrates 21st century care. Maslow (1954) devised a pyramid of needs. A person would need to fulfil each level of the pyramid before they could move to the next with the most basic needs coming first. If Cecil?s care is placed in juxtaposition with Maslow?s hierarchy of needs (1954) does he reach the pinnacle of self-actualisation? No, but that is what healthcare today wants. In fact Cecil?s care fell short at the second stage, safety and security after his fall. Care today is supposed to be holistic and person centred, taking in all of Cecil?s needs. There are instances were this does happen but it falls short in other areas. For example, treatment for his SA symptoms could be deemed successful, which had knock on effects on improving his mood. However no one seemed to take real interest in his suicidal statements, they were dismissed most likely because staff felt there was only time to concentrate on the physical symptoms. This is a real shame because whether the lack of time was real or perceived the nursing model still stipulates caring for the whole person which, in Cecil?s case did not happen. Hence the writer feels this is a good example of the kind of care that was observed. If it were possible to help Cecil all over again, emphasis would wholly have been put on caring for Cecil not just Cecil?s SA or COPD or hypotension which were treated as inanimate extensions of him. Word count: 3,006. ...read more.