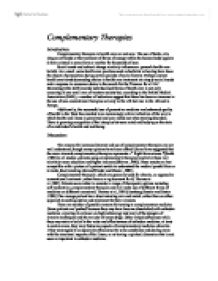 Complementary Therapies Introduction: Complementary therapies in health care are not new. The use of herbs, oils, lying on of hands or the treatment of forms of energy within the human body appears to have existed in some form or another for thousands of year. Social trends and cultural change similarly influences a person's health care beliefs. As a result ,some health care practices such as herbalist or healing have been the object of persecution during certain periods of social history .Perhaps current health care trends demanding choice in health care treatment are simply social trends and a response to consumer desire in the search for the 'Panacea for all ills'. Interestingly the shift towards individualised forms of health care is not only occurring in one small area of western society but, according to the British Medical Association (BMA), a number of indicators suggest that there has been an increase in the use of non-conventional therapies not only in the UK but also in the US and in Europe. Additionally, the successful use of preventive medicine and enhanced quality of health in the West has resulted in an increasingly critical reflection of the way in which health and illness is perceived and care meted out when treating disorders. ...read more.

An important but under-researched area is the extent to which Complementary therapies services and products are covered by public reimbursement. Reports suggest that in the UK the availability of Complementary therapies on the NHS is highly variable geographically and has also fluctuated with changes in purchaser organisations since the early 1990s. German data suggest that reimbursement has declined, with a number of products being removed from the list of reimbursable items by the statutory health insurance funds. Summary: Complementary and alternative medicine, as defined by NCCAM, is a group of diverse medical and health care systems, practices, and products that are not presently considered to be part of conventional medicine. Cultural ,educational and ideological factors effect choices ,but also access and availability ,as well, of course ,as the acute and chronic nature of their illness ,that is ,in some countries certain types of therapies abound ,which in others they are comparatively rare and highly thought of. Clearly a substantial and almost certainly growing minority of people consult complementary practitioners in Britain and other industrial countries such as Germany. The current climate towards CAM is different from a few years ago. The public is calling for broader healthcare choices and the new patient-centred NHS needs to deliver them. ...read more.

It was unclear what the purpose of the essay was - the introduction provided did not explain it. The writer should explain to the reader what the aim of the work is; the arguments in the essay should then follow on from that. The writer was clearly aware of the various types of therapies and the different types of people who may take up their use.
With regard to the table that was used, it is important to use the data critically