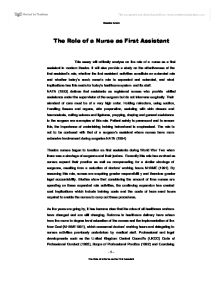 The Role of a Nurse as First Assistant

The Role of a Nurse as First Assistant This essay will critically analyse on the role of a nurse as a first assistant in modern theatre. It will also provide a study on the effectiveness of the first assistant's role, whether the first assistant activities constitute an extended role and whether today's scrub nurse's role is expanded and extended, and what implications has this made for today's healthcare system and its staff. NATN (1993) defines first assistants as registered nurses who provide skilled assistance under the supervision of the surgeon but do not intervene surgically. Their standard of care must be of a very high order. Holding retractors, using suction, Handling tissues and organs, skin preparation, assisting with skin closure and haemostasis, cutting sutures and ligatures, prepping, draping and general assistance to the surgeon are examples of this role. Patient safety is paramount and to ensure this, the importance of undertaking training beforehand is emphasised. The role is not to be confused with that of a surgeon's assistant where nurses have more extensive involvement during surgeries NATN (1994) Theatre nurses began to function as first assistants during World War Two when there was a shortage of surgeons and their juniors. Recently this role has evolved as nurses expand their practice as well as compensating for a similar shortage of surgeons, resulting from a reduction of doctors' working hours NHSME (1991). By assuming this role, nurses are acquiring greater responsibility and therefore greater legal accountability. Studies show that considering the amount of time nurses are spending on these expanded role activities, the continuing expansion has created cost implications which include training costs and the costs of increased hours required to enable the nurses to carry out these procedures. ...read more.

Timmons (2000) states that evidence on the above statement is based on the qualitative study exploring theatre nurse practice. The methodology of this study used observations of scrub nurse practice and interviews with scrub and theatre nurses. As suggested by NATN (1993), some first assistant activities (e.g. assisting with skin closure and haemostasis, cutting sutures and ligatures, prepping, draping etc.), were actually all routine theatre nurse practice. Sutherland et al (2000) confirmed these findings in a later audit of theatre nurse practice showing that in 951 surgical cases, 73% of the theatre nurses undertook first assistant activities, and on asking why, 39% of them said the activities were a part of their normal practice, especially prepping and draping. Even EORNA (1997) supports this idea of first assistant tasks in the curriculum content for theatre course, e.g. preparation of the patient. This does not mean that the first assistant role is not an extended role, but rather the tasks currently described by NATN as being a part of first assistant role may be routine theatre practice. Tanner (2000) states that the observations of theatre practice identified some activities which occurred infrequently, were limited to certain surgical specialities and appeared to require additional education or understanding, e.g. staff developing x-rays, setting up image intensifiers, shaping grafts, putting cement on prostheses, hammering, preparing 'back slabs', cementing and directing laparoscopic camera equipment. The author continues by saying that it does not mean that these tasks are skills of the first assistant but merely that these tasks seemed to be additional skills which may form part of the future developing role of the theatre nurse. NATN's principles of safe practice in the perioperative environment (1998) ...read more.

The role of the first assistant has wide implications, legally and professionally, and all theatre nurses must be aware of these. Nurses have a unique professional role and it is essential that this is developed and not eroded if nurses take on the role of the first assistant. Wright (1995) states that expanding the role of a theatre nurse is fraught with difficulties, but also full of possibilities. Observation of theatre nurse practice suggests that prepping, draping and retracting are routine theatre practice and not extended duties which require additional education and separate contracts. This should not be misinterpreted as suggesting that first assistant activities do not require additional education or separate contracts, but simply that some of the activities previously mentioned, which are identified as being first assistant activities, do not require this. The author feels that if boundaries to theatre nursing practice are set which are incorrect or inflexible, theatre nurses may find themselves excluded, not only from carrying out these routine tasks, but from any future tasks developed in response to a changing environment . Stretching the boundaries of care, may, of course, increase the employment opportunities for theatre nurses in an increasingly competitive and cost-conscious healthcare market. More importantly, it seems that the patient has a chance of a better deal. Formal approaches to role expansion can replace the previous ad hoc methods providing safer practice and legitimising what many nurses already do anyway. There is no need to fear the creation of a 'mini-doctor' if we are clear about our values, practices and methods of development. Indeed, the potential is there to create many varied 'mega-nurse' roles that can be turned into a genuine clinical career structure, based not on managerial hierarchy, but on expanding knowledge and skills in patient care Wright (1995). ...read more.