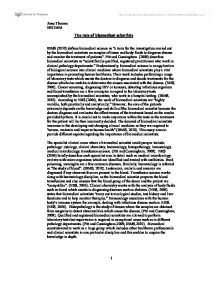 The Role of Biomedical Scientists in Modern Healthcare.

(NHS, 2006). Clinical chemistry works with the analysis of body fluids such as blood which assists in diagnosing diseases such as diabetes. (NHS, 2006) states that biomedical scientists "carry out toxicological studies, test kidney and liver functions and to help monitor therapies." Immunology associates with the human body's immune system for example, dealing with infectious disease such as AIDS. (NHS, 2006). Histopathology is the study of tissues where the samples are obtained from surgeries to detect abnormalities which cause the disease. (Pitt and Cunningham, 2009). Qualified and registered biomedical scientists are allowed to perform laboratory tests but supervision is required in exceptional cases such as in different pathology departments. (Pitt and Cunningham,2009; IBMS,2010). Biomedical scientists tend to work as a large group which includes other healthcare professionals and clinical scientists in one particular discipline and this enables to acquire the knowledge in depth. IBMS (2010) illustrates that "70% of the diagnosis are based on the pathology results provided by the biomedical scientists." Majority of their work deals with processing routine specimens, carrying out various experiments and interpreting scientific results. ...read more.

Hence a broader array of skills is vital to put the scientific knowledge into practical use. (IBMS, 2010). Biomedical scientists should be capable to work accurately and efficiently, as this allows executing their scientific knowledge to analyse and interpret scientific data. Good communication skills are essential and this forms an integral part in demonstrating laboratory techniques. Pitt and Cunningham (2009) highlights that as "a registered practitioner, a biomedical scientist can work autonomously" which means that they are expected to be able to prioritise tasks such as planning and experimenting laboratory tests. Biomedical scientists need to be updated regularly with modern scientific advances and current issues on pathology. Over the biomedical scientist trainee period, technical and transferable skills are developed in order that they can progress into senior roles. Professionals are expected to work at highest standards of conduct set by the professional body. Biomedical scientists play a major role in supporting patient care through their diagnostic investigations which aids the clinicians to decide the effective treatments. It is however a "rewarding and challenging" career which gives immense opportunities to develop expertise in various disciplines. (Pitt and Cunningham, 2009; IBMS, 2010). ...read more.