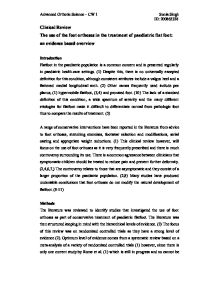 The use of the foot orthoses in the treatment of paediatric flat foot: an evidence based overview

Clinical Review The use of the foot orthoses in the treatment of paediatric flat foot: an evidence based overview Introduction Flatfoot in the paediatric population is a common concern and is presented regularly in paediatric health-care settings. (1) Despite this, there is no universally excepted definition for this condition, although consistent attributes include a valgus heel and a flattened medial longitudinal arch. (2) Other names frequently used include pes planus, (1) hypermobile flatfoot, (3,4) and pronated foot. (10) The lack of a standard definition of this condition, a wide spectrum of severity and the many different etiologies for flatfoot make it difficult to differentiate normal from pathologic foot thus to compare the results of treatment. (5) A range of conservative interventions have been reported in the literature from advice to foot orthoses, stretching exercises, footwear selection and modifications, serial casting and appropriate weight reductions. (1) This clinical review however, will focus on the use of foot orthoses as it is very frequently prescribed and there is much controversy surrounding its use. There is a common agreeance between clinicians that symptomatic children should be treated to reduce pain and prevent further deformity. (2,4,6,7,) The controversy relates to those that are asymptomatic and they consist of a larger proportion of the paediatric population. (2,8) Many studies have produced undeniable conclusions that foot orthoses do not modify the natural development of flatfoot. (8-11) Methods The literature was reviewed to identify studies that investigated the use of foot orthoses as part of conservative treatment of paediatric flatfoot. ...read more.

It occurs mostly in children with some underlying pathology, tends to persist, and frequently causes disability. (6,7) Diagnosis An understanding of the normal evolution of the medial longitudinal arch in the child's foot is very important when diagnosing. (6,13) When the child is born, the foot is in a calcaneo valgus position with no longitudinal arch apparent but a pad of fat on the medial side as shown in figure 1. (13) The arch starts to develop after the age of about 2-3 years where this flat arch is considered normal (13) and develops progressively over the first decade of life. (5) According to Fixsen, (13) the most useful test in diagnosing flexible from rigid flatfoot is the great toe extension test (Jack's test) in which, when the child is asked to stand on their tip toes, the medial arch appears, heel goes into varus and the tibia externally rotates. (13) If these occur then most certainly the clinician is dealing with a flexible flatfoot and not pathological. Figures used from Fixsen 1998 published in the Journal of the Royal Society of Medicine. Results Table 1 summarizes the two randomized control trials which is the best available research addressing the use of foot orthoses for paediatric flatfoot. (9,10) Whitford and Esterman, 2007 (10) conducted a randomized parallel, single-blinded, controlled trial of custom-made and prefabricated orthoses on 178 children between the ages of 7 and 11 years with "flexible excess pronation". The diagnosis was based on calcaneal eversion and navicular drop. ...read more.

Many papers shed light on the prevalence of the problem and the debate surrounding the treatment for flexible flatfoot. In 1989, Wenger et al. (9) concluded that wearing foot orthoses provide no long-term functional benefit and children should not be burdened with them. However, orthoses are still prescribed very frequently with no high-level evidence that they improve function or reduce pain. (10) In summary, it can be concluded that there is a lack of good-quality research available for the clinician. Poor-quality research provides limited results and can be misleading for the clinicians who require well-substantiated studies to guide them. (2) Areas of ongoing and future researches * 2006 A systematic review (meta-analysis). This intervention protocol can be accessed from The Cochrane Database of Systematic Reviews Title: Non-surgical intervention of paediatric pes planus Aim: To evaluate the evidence form randomized controlled trials for the non-surgical intervention of paediatric pes planus. Additional educational resources * Dr. Angela Evans from South Australia's Podiatry research group has published clinical practice guidelines for the diagnosis and treatment of paediatric flatfoot. Reference: Angela Evans. "The flat-footed child-to treat or not to treat? - What is the clinician to do?" Journal of the American Podiatric Medical Association 2008; 98(5):386-93. Resources for patients * Useful general information for patients. Outlines symptoms, diagnosis and treatment options for paediatric flatfoot. http://www.foothealthfacts.org/footankleinfo/pediatric-flatfoot.htm Website generated by the American College of foot and ankle surgeons. * This website helps to answer some of the questions that parents of children with flatfeet may have. http://www.foothealthfacts.org/footankleinfo/pediatric-flatfoot.htm * Dr. Angela Evans shares her expertise in the area having been involved in research at the University of Adelaide. There is also a discussion forum for parents to share their child's story. http://www.abc.net.au/health/talkinghealth/factbuster/stories/2009/08/13/2654510. ...read more.