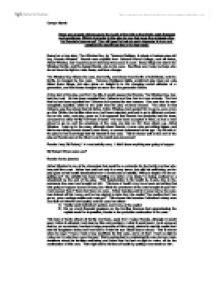 There are several references to the 'cost' of the trial to the family, both financial and emotional. Which character in the play do you feel pays the greatest price for Ronnie's innocence?

There are several references to the 'cost' of the trial to the family, both financial and emotional. Which character in the play do you feel pays the greatest price for Ronnie's innocence? You will need to look at each character in turn and consider the sacrifices she or he has made. Based on a true story, The Winslow Boy, by Terrence Rattigan, is about a fourteen-year-old boy, Ronnie Winslow. Ronnie was expelled from Osborne Naval College, and his father, Arthur Winslow, has vowed to prove the boys innocence in court. Many things are lost to the Winslow Family, and it's closest friends, due to the case. Sacrifices are made, by those who do not have the right to make these, and lives change. The Winslow Boy follows the case, the family, and shows how the life of individuals, and the family, is changed by the case. Terrence Rattigans highly acclaimed play does not only follow these things, but also gives an insight in to the changing social attitudes of a generation, and how these changes are seen from the generation before. At the start of the play, and from the title, it would appear that Ronnie, The Winslow Boy, has lost the most. ...read more.

This is shown when he says "I have made many sacrifices for this case, some of them I had no right to make, but I made them none the less." this is saying that by continuing this case he has made decisions about his families well-being and future that he had no right to make, all for the continuation of this case. This might add to his loss of health by putting more stress on him. Also, throughout the play, he has drifted from Grace, his wife, until the end when his loss of health makes him more dependent on others, therefore he becomes more dependent of Grace, and so his deterioration in health has good points and bad points. As does the case, although there are lots of bad points there is a good point, Arthur gets closer to Catherine. In the play it would seem that Grace has lost fairly little. But as the play goes on you see things begin to change. Her way of life has begun to change. There are two examples of this "Oh Dear! It's so difficult! I simply can't be seen in the same old dress, day after day!" ...read more.

Although he does turn down this position it is probably at not to great a cost. He already has a comfortable life. Almost everything that he needs, and turning down this role is mainly turning down the title and prestige that comes along with it, for he has no real need of most other benefits. In conclusion, all members of The Winslow family, immediate family or not, have lost things. In my opinion the family member who has lost the most is Arthur. He has lost money but more importantly, he has paid to clear his sons name with his own health. This, in my opinion, is one of the greatest sacrifices someone can make for another individual. His loss of money is substantial, but the whole family is affected by this loss. The other family member who has lost things on almost equal terms as Arthur is his daughter Catherine. She has lost her fianc�, John Watherstone, and there has lost a future. Although it can be said that there was not "true-love", she has lost life security, and a life with someone who wants to be with her. But this cannot be compared to Arthur's loss, for he has increased the chances of his death to make his sons future better. Carwyn Morris ...read more.