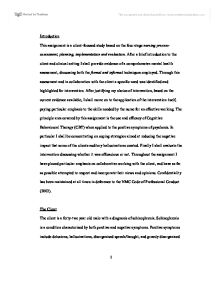 This assignment is a client-focused study based on the four stage nursing process- assessment, planning, implementation and evaluation.

Introduction This assignment is a client-focused study based on the four stage nursing process- assessment, planning, implementation and evaluation. After a brief introduction to the client and clinical setting I shall provide evidence of a comprehensive mental health assessment, discussing both the formal and informal techniques employed. Through this assessment and in collaboration with the client a specific need was identified and highlighted for intervention. After justifying my choice of intervention, based on the current evidence available, I shall move on to the application of the intervention itself, paying particular emphasis to the skills needed by the nurse for an effective working. The principle area covered by this assignment is the use and efficacy of Cognitive Behavioural Therapy (CBT) when applied to the positive symptoms of psychosis. In particular I shall be concentrating on coping strategies aimed at reducing the negative impact that some of the clients auditory hallucinations created. Finally I shall evaluate the intervention discussing whether it was efficacious or not. Throughout the assignment I have placed particular emphasis on collaborative working with the client, and have as far as possible attempted to respect and incorporate their views and opinions. Confidentiality has been maintained at all times in deference to the NMC Code of Professional Conduct (2002). The Client The client is a forty-two year old male with a diagnosis of schizophrenia. Schizophrenia is a condition characterised by both positive and negative symptoms. Positive symptoms include delusions, hallucinations, disorganised speech/thought, and grossly disorganised behaviour. Negative symptoms include affective flattening, alogia and avolition (Fortinash & Holoday Worret 2003). The DSM IV Diagnostic criteria for Schizophrenia states that two (or more) of the above must be present for a 'significant period of time' during a one month period for a diagnosis to be made. The client under study experiences auditory hallucinations, hearing both benevolent and malevolent voices at differing times, and possesses little insight into the nature of his condition, 'I'm not ill it's just chemicals in my brain'. ...read more.

The goal of the assessment therefore was to enhance the clients coping strategies in the hope of reducing the negative effects the malevolent voices were having upon him. Intervention Having now identified the area of prime concern to the client I shall endeavour to justify and explain the application of the selected intervention. Following discussions based around the evidence provided by the assessment procedure it was decided collaboratively by the MDT that the client could possibly benefit from a course of Cognitive Behavioural Therapy (CBT) to run in conjunction with his use of anti-psychotic medication. During this section I shall therefore initially look at what CBT is, followed by a review of the evidence concerning its effectiveness when applied to psychosis. Finally I shall discuss the necessary skills for the successful application of the intervention and attempt to link it to my own approach with the client. As with the assessment tools used previously my student status and lack of specialised training in the area of CBT meant that I could not actively engage in the therapy itself. It was therefore decided in collaboration with the psychologist and my mentor that I spend time with the client to a) reaffirm and reflect with the client on his CBT sessions and b) attempt to explain any problems the client may have, and encourage him in the upkeep of his coping strategies. What then is CBT? CBT is not a single therapy in itself, but is an umbrella term for a variety of interventions (Cormac et al 2004). Each of these interventions aim to reduce dysfunctional emotions and behaviour by altering behaviour and by altering thinking patterns, based on the assumption that prior learning is currently having adverse consequences. The purpose of therapy is to reduce this distress or unwanted behaviour by undoing this learning or by providing new more adaptive learning (Thompson & Mathias 2000). ...read more.