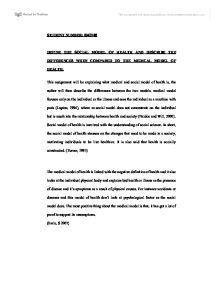 This assignment will be explaining what medical and social model of health is, the author will then describe the differences between the two models.

The medical model of health is linked with the negative definition of health and it also looks at the individual physical body and explains bad health or illness as the presence of disease and it’s symptoms as a result of physical causes. For instance accidents or diseases and this model of health don’t look at psychological factor as the social model does. The most positive thing about the medical model is that, it has got a lot of proof to support its assumptions.

The social model would appear to be based on the notion that people are not disabled due to illness or injury. Instead, the sociologists say that they are disabled because of how the society is constructed. (Marshall, 1998).  However, the medical model disagrees with the social model, medical model views a person’s injury as the cause of the disability and that the person with the disability is to learn how to adapt within a society, instead of society adapting to them.

Medical professionals say that smoking is the main cause of lung cancer in this country but at the end of the day, not all smokers get lung cancer before they die. This suggests that there must be other underlying factors that are involved with smokers getting lung cancer.

On concluding, the social model of health is very important to health. Because patients or individuals  do not live in a hole or coner, but in a wider society. As one says that health is a social state affair so if one is ill or disesed, it affects the family, the society and country as a whole (Turner, 1995). So does it mean that medical model is not good?

However this is simple to answer, it is clear that the answer is no. even though the social model of health has good point and a lot of  success in health care, there will always  and forever be the need of medicla drugs, operations and medical treatment. But more importantly, there should always be a place for the concentration on the individuals and their symptoms which is the mean goal of the medical model of health approach.