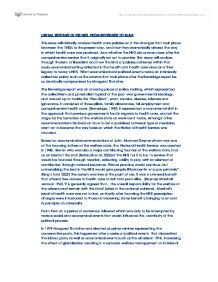 This essay will critically analyze Health care policies and the changes that took place between the 1940s to the present day, and how they dramatically altered the way in which health care was provided.

LIBERAL REFORMS IN THE NHS, FROM BEVERIDGE TO BLAIR

This essay will critically analyze Health care policies and the changes that took place between the 1940s to the present day, and how they dramatically altered the way in which health care was provided. And whether the NHS did or even does offer the comprehensive service that it originally set out to provide. This essay will analyze through the lens of liberalism and how the kind of policies achieved within that socio-economical setting reflected in the health and health care area and their legacy to today’s NHS. What economical and political events made an intrinsically collectivist policy such as the reforms that took place after the Beveridge report be so drastically compromised by Margaret Thatcher.

The Beveridge report was an amazing piece of policy making, which represented the collectivism and paternalism typical of the post-war governmental ideology, and was set up to tackle the ‘Five Giant’, want, squalor, disease, idleness and ignorance. It consisted of three pillars, family allowances, full employment and comprehensive health care. (Beveridge, 1942) It represented a monumental shift in the approach that previous governments had in regards to health care, and set the stage for the formation of the welfare state as we know it today. Amongst other recommendations his ideas on how to set a socialized universal type of medicine went on to become the very basis on which the National Health Service was founded.

Based on economical recommendations of John Maynard Keynes whom was one of the founding fathers of the welfare state, the National Health Service was created in 1948.  Bevan who was also a major contributing founder of the welfare state, had as an ideal at the start (Baldock et al, 2005)of the NHS for it to be “a service that would be founded through taxation, reflecting  ability to pay, with an element of contribution through national insurance. Private practice would continue, but universalizing the best in the NHS would give people little incentive to pay privately”. (king’s fund 2005) The system was free at the point of use. It was a universal benefit that offered free access to health care to rich and poor alike. (Keynes) Marshall wrote in 1965, 'it is generally agreed that... the overall responsibility for the welfare of the citizens must remain with the state'(cited in the national achieve). Marshal’s ideal of health care was not to last, as shortly after founding the NHS prescription charges were introduced to those not receiving states benefits, bringing to an end its principle of universality.

From then on a period of consensus followed which was only to be interrupted by various social and economical events that would influence the continuity of the political process.

In 1979 Margaret Thatcher was elected as prime minister representing the conservative party, this happened after a series of political events that discredited the labour party as well as economical events such as the oil crisis in 1974, increasing the effect of globalisation resulting in a reduced welfare management of individual countries within a global context and in the case of the NHS, a number of damaging strikes (Lewis, Gewirtz and Clarke, 2002)  all of which contributed to a change on the social sentiment of the nation. Margaret Thatcher was a believer of liberalism and taking into consideration the definition of liberalism:’ a progressive ideology which 5 main beliefs are: Individualism, freedom, reason, justice and tolerance’,(reference) meant that policies made in that kind of political setting would focus on individual responsibilities as well as a marked emphasis on economical efficiency, which makes them a platform for development of laissez-faire (let it be) inclined government. (reference)

The introduction of markets into the welfare state was a clear characteristic of Thatcherism (Lowe and Jones, 2002) and it meant that there was an increase in the use of private medical insurance, encouragement for hospitals to opt out of local authorities administration, introduction to the provider/purchaser split and control of budgets handed over to general practitioners.

A general decrease in the role of the government and an emphasis in cost cutting as well as a marked focus on individual responsibilities were factors that were carried on by the political successor New Labour party and maintained after its triumph in 1997. New Labour, despite the ideology that had previously distinguished Labour, had by now and since the post war years displayed characteristics that could be described as right wing and the laizee faire approached that had proliferated in Thatcher’s years was consolidated by Tony Blair’s pragmatic approached to welfare policies. “The most politically pressing issue for new labour government in 1997 was whether the internal market would generate the kind of inequalities that the NHS was founded to eliminate” (Baldock et al, 1999 :)

In the health care area, this in term, meant that the rights that had previously been granted to the citizen were now only conditionally met (Rodney lowe, 2002). ‘The no rights without responsibility’ slogan became the basis for a flourishing market based management approach to health care. The introduction of targets to secure the efficiency in the running of health care units and hospitals together with the development of the health manager meant that doctors and clinical staff were now subjected to constant scrutiny and overwhelmed by bureaucratic tasks, which in term reduced the amount of times they were able to spend with their patients. The importance of meeting targets became crucial as the delivery of budgets and expenditure amounts were depending upon it. (Alcock, 1996) Other typical factors of the health care policies ideology of that time were a combination of Central Control, Staff Empowerment and Regulation.

Regulation was undoubtedly a big product of the third ways approach to health care and the creation of regulatory bodies, such as NationalInstitute for Clinical Excellence to determine clinical guidelines for all medical conditions, National Service Frame Works to specify the path which all treatments must follow; and a commission for health improvement to inspect each hospital every three years. (Lowe, 2002)

New Labours policy agenda renegotiated the welfare deal between citizens and state placing the responsibility on patients which had now become the consumer of health, while decreasing the role of the government on delivery of the health care service but ultimately the success according to Rodney Lowe and Margaret Jones should not be dependent on the structure of the institution but on its affect on the nation’s health. (lowe,2002)

New Labours construction of citizens was based on the notion of individuals taking responsibilities for themselves which is evident in today’s policies. According to Balldock el al “the rationing that has taken place has meant that some services have been withdrawn from the NHS in some areas (cosmetic operations, fertility treatment, and long term care of the elderly). Some group of patients are less likely to receive services then others and there is evidence of discrimination against older patients; smokers may be deemed less likely to benefit from treatment” (Baldock et al, 1999). Other groups that are also being subjected to discrimination are people suffering from obesity and alcohol dependency as New Labours approach highlights that the blame and responsibilities should be placed on the patient in these due to the ‘self inflicted’ characteristics of their illnesses. So the agenda is now focussing on the ‘wellbeing’ rather than sickness.

Having analysed and interpreted the effect that liberal based policies have  had on the social area of health care, it becomes apparent that the individualistic characteristics of the citizenship theory do translate into policies that are not generally inclusive of all citizen .The importance placed on the cost effectiveness of the institution does somehow hinder its humanly purpose. The management of markets within the NHS has had a profound impact on the levels of inequality and its purpose of increasing efficiency while keeping costs down are highly contested. The NHS  that we enjoy today might be still in its very basic structure that of Beveridge , Bevan, and Keynes but is a now a far cry from the comprehensive service that it was set out to be and was for the early years of its creation.  Even while still carrying the legacy of Thatcher’s liberal policies, the socialised medicine service that we receive today is, although flawed, perhaps our best option, so, in this light, governments should concentrate their efforts in achieving the type of policy making that brings us back to the original makings of the Welfare State rather than further from it. Socialising rather than privatising must be the order of the day, as the effects of privatisation on such a sensitive social area could have devastating effects on those in more need of the system.

King’s fund (2005), An Independent Audit of the NHS under Labour. London: King’s Fund.