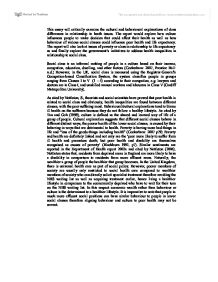 This essay will critically examine the cultural and behavioural explanations of class differences in relationship to heath issues.

This essay will critically examine the cultural and behavioural explanations of class differences in relationship to heath issues. The report would explore how culture influences people to make decision that could affect their health as well as how behaviour of various social classes could influence poor health and life expectancy. The report will also look at issues of poverty or class in relationship to life expectancy as and finally explore the government's initiatives to address health inequalities in relationship to social class. Social class is an informal ranking of people in a culture based on their income, occupation, education, dwelling, and other factors (Cockerham: 2007, Prentice Hall: n.d.) However, in the UK, social class is measured using the Registrar-General's Occupation-based Classification System, the system classifies people in groups ranging from Classes I to V (1 - 5) according to their occupation, e.g. lawyers and doctors are in Class I, and unskilled manual workers and labourers in Class V (Cardiff Metropolitan University). As sited by Nettleton, S., theorists and social scientists have proved that poor health is related to social class and obviously, health inequalities are found between different classes, with the poor suffering most. Behavioural/cultural explanations tend to blame ill health on the sufferers because they do not follow a healthy lifestyle. As cited by Tan and Goh (1999), culture is defined as the shared and learned way of life of a group of people. ...read more.

In this respect, poor people would be less healthy than more affluent people because of limited choices and poverty. Due to ACORN, a system for service delivery based on post codes, the poor tend to pay more towards insurance, interest for bank loans as well as utility charges therefore condemning the working class to more poverty and inevitably poor health. Lewis (1960) explained the consistency of poverty and he stated that poor people have a distinct culture that is passed from generation to generation; therefore culture is the obstacle to a healthy lifestyle. In cases where dependency on the state transcends from generation to generation especially amongst people living in lower social classes, it is highly unlikely for such people to move out of poverty because they would have inherited the same habits that they were raised up in. The onus is on such people to change the culture of dependency to a culture of more economic active citizens so that their health and that of their children could improve hence a change in culture would result in healthier citizens albeit social class. As cited by Nettleton (2006), Arber and Cooper (2000 p 176) state that "...since the 1990s, the key material divide for children's health is whether their parents are in paid employment, rather than their position in the class structure" Cultural explanations essentially place the blame on individuals themselves, in what are called 'victim-blaming' theories. ...read more.

The elderly are vulnerable to poverty, especially those with a low pension. The government has provided free eye tests and reduced transport fares to ensure they too have some level of security. Housing is another form of security; if the home is unsafe, it can lead to bad health through damp or cold conditions. The government are aiming to offer more opportunities for people to have safe housing. Correlation between social class and health status has long been recognised by governmental organisations and academic communities; however, agreements as to the mechanisms driving this inequality are still contested. There is a general consensus among sociologists based on evidence from the Black Report, Acheson and The Joseph Rowntree Trust that structural and cultural factors are the main contributors to health differentials between classes, and that in reality these factors are interrelated. There is also evidence that material and structural factors, such as housing and income can in fact affect health. The discussions above have shown that unfavourable social conditions (poor education, poor diet, morbidity) limit the choice of an individual's life style and it is this set of studies, which illustrates most clearly to many sociologists that behaviour, and attitudes cannot be separated from its social environment. As social and economic life have major influences on the patterns of illness and death, this essay has shown that many inequalities of wealth, income, education, occupation and social privilege continue would impinge on the lifestyle of people in lower social classes thereby resulting in health equalities. ...read more.