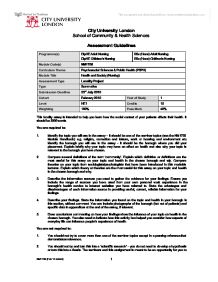 This locality essay is intended to help you learn how the social context of your patients affects their health. Locality Project - How Homelessness affects Health in Hackney.

He stated that people of a poorer income are more at risk of being exposed to these risks as they have no choice as to where they are housed. (Acheson 1990, cited by Senior 1998), stated that families that have to share where overcrowding is an issue are more at risk of sanitation issues because of the amount of people sharing a bathroom or kitchen. This type of risk, I believe, is a big problem in Hackney, where there are a lot of substandard properties still waiting to be refurbished by the council. As Hackney has very diverse cultures, there are many families who have many more occupants than the property was designed for. Infectious diseases such as Tuberculosis are more problematic in overcrowded properties (Project, 1998). Project (1998) stated that it is not only the types of properties that people live in that affect health, but the environment that people have to live in, such as the quality of the air or pollution, the degree of community interaction, and the visual appearance of the area or neighbourhood. Project also stated (Project, 1998) that families that live in high rise blocks live in areas of high crime and are more at risk of high levels of mental stress. Due to the fact that Hackney has many flats and high rise blocks where they are more at risk of crime than suburban areas, I'm sure that many people suffer from anxiety and stress. However, Hackney has many open spaces and parks which are full in the summer months, and I am sure they are a source of stress release for families living in these types of properties. Denny and Earle (2006) stated that homelessness affects health in a number of ways. People living on the street face particular threats, and their condition can bring feelings of isolation, stress and depression. The same group of people are also restricted in terms of access to proper food and nutrition (Denny and Earle, 2006). ...read more.

This, I found, has contributed greatly to the mental and physical health of many who find themselves in this predicament. I have concluded that Hackney is trying to address this problem by building more social housing and revamping existing properties; however, I feel that it is a problem that may not be fully addressed due to a rising population and demand for properties that either haven't been built yet or may never be built due to land constraints. This is bearing in mind that Hackney has 207,000 residents and 86,402 properties and is building only 1,891 homes over the next three years (London borough of Hackney, 2010). My final point is regarding the homelessness problem that Hackney is facing. I have concluded that there are many reasons why a person may find themselves homeless, from people that have made themselves homeless deliberately, to people that have, for example, had to leave a violent or abusive home. The physical and mental health of these people is at a higher risk of deterioration than that of the general population. I found that people that are homeless have their health affected in a number of different ways, including physical threats, which is a major problem for those literally living on the streets, along with mental and social isolation and depression (Denny and Earle, 2006). I also found that there are different organisations in Hackney that are available to help the homeless, such as Homeless.org who advise people to contact the council and apply for one of very few hostels in the borough. They also advise people to contact Hackney Housing Advice Centre for help. My overall conclusion is that Hackney is one of the poorest boroughs in London, and even by UK statistics is poor. It is also a borough with quite a high crime rate, both on housing estates and in terms of general crimes such as burglary, robbery and crimes against people (met.police.uk, 2010). It has a very diverse population and many different class tiers with differing health needs. ...read more.