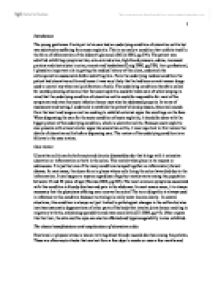 Ulcerative colitis. The young gentleman I took part in his care had an underlying condition of ulcerative colitis but was admitted as suffering from acute nephritis. This is normally a condition that exhibits itself in the form of inflammation of the kid

Normally the frequent bouts of diarrhea that one experience bring about discomfort and can as well are very embarrassing and depressing too. It is therefore very pertinent in care that the patient is emotionally supported and listened to in a very empathic nature. The problems that the patient suffers should be solved in a cooperative manner such that the intervener and the patient are all involved. Prior to being admitted, it was obvious that the patient had undergone a lot of economic stress because his condition took him out of employment and the high costs of healthcare was also taking a toll on him. He was not having an active lifestyle due to his condition. The embarrassing episodes of diarrhea were too much for him and hence he could not even hang out with friends anymore. This means he was under intense social and psychological stress due to the loneliness that the disease had brought upon him. All these were to be taken into consideration when formulating the care plan. Causes of Ulcerative colitis This condition is not linked to any direct causes but have several possible factors linked to it. The first is genetic factors. Ulcerative colitis is believed to be highly likely to occur in families where there is an aggregation of the ulcerative colitis, where identical twins with a concordance rate of about 10% or even among dizygotic twins with a concordance of about 3%. Issues of genetic markers as well as linkages also make up important determinants on issues pertaining to genetic causes of ulcerative colitis. It is believed that there are about 12 regions making up the genome that are linked to ulcerative colitis. They are chromosomes sixteen, twelve, six, five, fourteen, one and three among others. The chromosome band 1p36 is for instance believed to be linked to the inflammations that occur in the stomach. Transporter proteins like OCTN1 and OCTN2 are also encoded from certain putative regions. ...read more.

In cases where an internal reservoir is to be built, a continental ileostomy can be used. In this case, an external appliance to collect the waste would not be needed. Instead, it is the internal reservoir that is drained periodically like at intervals of about 3 to 4 hours by simply inserting an evacuation tube into the reservoir (Podolsky 2002, pg 105). The option of having the reservoir internally has always been thought to be good because it reduces the risk of recurrent colitis. The only difficulty is that the reservoir may also start leaking prompting another surgical operation to revise the whole process of inserting the reservoir. Whereas there are several surgical options that can be adopted in treating this, the ileoanal procedure is always the most common. This operation would be instrumental in restoring normal evacuation for the patient. However due to antibiotic treatments for the infections of the bowel, some patients can always suffer from a condition known as pouchitis, which is mainly an inflammation of the inserted pouch. This is always a response from the antibiotic treatment. In cases where the pouch fails and it has to be removed, a more permanent solution like a permanent ileostomy would have to be put in place. Conclusion The pathogenesis of ulcerative colitis in not known nor does it have direct causes linked to it. Risk factors that are both genetic and environmental in nature are what have been linked to the condition in most cases. While taking care of the patient woo was admitted with acute nephritis, I undertook to establish the underlying medical condition (ulcerative colitis) since they have coinciding external symptoms. Diet therapies, medical therapies and even surgical operations are always preferred as effective interventions in the management of this condition and were applied appropriately. Spiritual care also played an important role in reducing the patient's stress levels as well as in building hope and confidence in him hence reducing anxiety and providing a platform of health stability. ...read more.