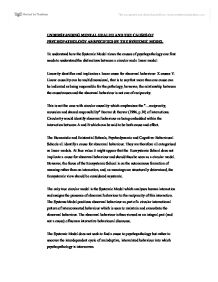 Understanding mental health and the causes of psychopathology as specified by the systemic model.

(1989. p.230). In seeking to understand mental health and to bring about stability to a system, the systemic model places great emphasis on communication. Systemic theorists believe that communication is always occurring at some level, and interpretation and reciprocity are inevitable. Communication occurs in three different modes which can be seen as verbal/digital mode, non-verbal mode and context (the blending of non-verbal mode and context is referred to as analog), and on two levels which can be seen as content (i.e. verbal/digital) and the process (i.e. analog). Optimal mental health is seen as occurring when these two levels are co-ordinated and communication is fluid and congruent. However, if these two levels are not matched, the interchange is dysfunctional. UNDERSTANDING MENTAL HEALTH AND THE CAUSES OF PSYCHOPATHOLOGY AS SPECIFIED BY THE HUMANISTIC-EXISTENTIAL MODELS Although the Humanistic and Existential Schools are separate and hold somewhat different views on the understanding of mental health, people have come to see them as being linked. In this essay I will discuss the differences and similarities and the impact this has on their perception of psychopathology and mental health. Evolving in reaction to the determinism of psychoanalysis, humanistic-existentialism views humans as proactive and responsible for their own functioning. We are responsible for creating our own optimal state of mental health. Both schools believe that a person's reality is in fact a subjective analysis of experiences, perceptions and comprehensions of the world. Therefore, when seeking to appoint underlying causes to abnormal behaviour, it is important to accentuate the person's experience and interpretation of events, rather than the actually occurrences. So, to understand mental health and the reasons for a person's abnormal behaviour, the humanistic-existential therapist must understand that person's subjective universe. ...read more.

The relationship is circular: Margaret behaves strangely and Ray expects and accepts that Margaret behaves strangely, so Margaret behaves strangely etc. Her psychological disturbances have become part of her persona which operates as a part of the family system. The humanistic-existential model is a linear model: Margaret's schizophrenia is a result of her inaccurate, incomplete and unhealthy perceptions and lack of purpose and goals. The Humanistic-existential psychologist would recognise Margaret's potential to self-actualise and would work with her to reassess her reality and her attitude towards her circumstances. Margaret has free will to make choices and is responsible for self-actualising and attaining and maintaining optimal mental health and normal behaviour. The systemic model places responsibility for Margaret's behaviour on the whole family and not just Margaret because their recursive interactions are seen to exacerbate and nurture her actions. Thus, the family, and not Margaret, would be considered to be the primary unit of treatment. Ray and the children's ideas and beliefs about Margaret, as well as their expectations for the future would be closely examined. The systemic psychologist would stress the importance for Ray and the children to get support and encouragement which will enable them to create and maintain a healthy family environment. Neither the systemic model nor the humanistic-existential model would emphasise the genetic factors associated with Margaret's schizophrenia but would rather "minimise these factors so that the patient's responsibility for himself can be enhanced" Ingamells (1993. p.26). The systemic model would see this as forcing the family system to acknowledge that the abnormal behaviour can be attributed to their behaviour and that they are thus co-responsible for its maintenance or demise. This would discourage Margaret and her family from viewing themselves as victims of the mental illness. ...read more.