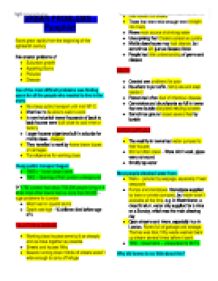 URBAN PROBLEMS - Pamphlet Towns grew rapidly from the beginning of the eighteenth century This created problems of: * Suburban growth * Appalling Slums * Pollution * Disease One of the most difficult problems was finding space for all the people who needed to live in the towns * No cheap public transport until mid-19th C. * Most had to be able to walk to work * In new industrial towns thousands of back to back houses were built close to coal mine or factory * Larger houses w/gardens built in suburbs for middle class - cheaper * They travelled to work by horse drawn buses or carriages * Too expensive for working class Cheap public transport began: * 1860's - horse drawn trams * 1862 - Opening of first London underground BY 1750 London had about 750,000 people living in it whilst most other towns had no more than 50,000 - huge problems for London * Most lived in squalid slums * Death rate high - 3/4 children died before age of 5 POLLUTION & DISEASE * Working class houses were built as cheaply and as close together as possible * Streets and houses filthy * Sewers running down middle of streets weren't wide enough to carry off refuge * Overflowed into streets * Those that were wide enough went straight into rivers * Rivers main source of drinking water * Unsurprising that Cholera spread so quickly * Middle class house may look cleaner, but sometimes still just as disease ridden * People had little understanding of germs and disease DEATH * Created own problems for poor * No-where to put coffin, family ate and slept beside it * Person had often died of infectious disease * Cemeteries and churchyards so full in towns that new burials disturbed existing corpses * Sometimes ground raised several feet by burials WATER SUPPLIES * The wealthy in towns had water pumped to their houses * Still not often clean - filters didn't work, pipes were ...read more.

of Government subsidy paid on each house * But only for local authority housing * Half a million council houses built as a result of this act BUT STILL NOT ENOUGH Council houses: * Decent * Low-cost * Very good value for money BUT * Dull * Dreary * Basic * Large estates - crime etc. NOW LEARN - TWO SIDES BEFORE BACK ON PUBLIC HEALTH PAMPHLET PUBLIC HEALTH -Pamphlet The problem: * Really appeared in the first half of the 19th C. * Because of industrial revolution and agricultural revolution * Living conditions deteriorated * No Government planning (planning permission also) * Government policy was "laissez faire" - leave them to do it 1) Living conditions improved 2) Population grew rapidly 3) Towns grew rapidly 4) Towns became overcrowded 5) Living conditions deteriorated Disease: 1.) * Typhoid fever * Dysentery * Cholera * All spread when people consumed drinking water or food contaminated with the excreta of people suffering from these diseases * Water borne diseases 2.) * Typhus * Infantile diarrhoea * Carried by insects and other vermin that thrived among filth and rubbish * One severe strain of typhus was carried around by body lice in people's clothes and on bodies 3.) * Tuberculosis * Scarlet fever * Whooping cough * Measles * Diphtheria * Spread by coughing and sneezing * People who lived in close contact with each other * Suffered from malnutrition * Recovering from another illness * - Were particularly susceptible to catch these diseases Cholera: * New disease in England in the 19th century * Particularly frightening - struck so suddenly * Seemed to be no cure * It first broke out in a number of big cities in 1831 (e.g Leeds) * In some places it shocked the local authorities into action * But they soon slipped back into bad old ways * Many outbreaks in the 1850's and 1860's Doctors: * Showed great courage - many went to towns to study cholera and help where they could * 1854 - Dr. ...read more.

Every town had to have Sanitary Inspectors with powers to order landlords to stop overcrowding and to remove health hazards from their properties * 1869 - Royal Commission revealed bad conditions * 1875 - An Adulteration of Food Act - stopped tampering with food 1875 - PUBLIC HEALTH ACT of 1875 - * Allowed authorities to pull down slums * There had to be a Public Health committee in every district * They had to provide water - * - Get rid of sewage * - Inspect food and markets * - Clear away rubbish * - and put a stop to unhealthy conditions in work places * Towns had to have a Health Inspector & a Sanitary Officer * COMPULSORY LEGISLATION THE PUBLIC HEALTH ACT OF 1875 WAS A LANDMARK. * It laid pattern, approach, principles of Public Health for the next 50 years * i.e the state was responsible for Public Health throughout the country * Improvements and reforms were to be uniform throughout the country The 1875 Public Health Act: * Gave further teeth to these developments * It wielded all of the existing laws on public health into one major new law ITS MAIN PROVISIONS WERE AS FOLLOWS: * All Local Authorities HAD to appoint a Medical Officer of Health * In the past they had the OPTION to do so if they wished * Liverpool appointed its first medical officer as early as 1847 * The local authorities were made responsible for the organisation of: * Refuse Collection * Mains Sewers and drains * Water supply * And Public Health * They HAD to ensure that all new homes had: * Piped water supply * Adequate sanitation with good drains and lavatories (not necessarily flush toilets) In the same year, the Artisans Dwellings Act gave local authorities the power to pull down slums and erect houses in their place SUM UP OF PUBLIC HEALTH * Public Health began to improve everywhere * There was an increase in life expectancy * The final achievement of Chadwick's aim - i.e. that all towns should be fit to live in ...read more.