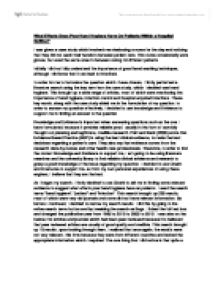 What Effects Does Poor Hand Hygiene Have On Patients Within a Hospital Setting?

What Effects Does Poor Hand Hygiene Have On Patients Within a Hospital Setting?

I was given a case study which involved me shadowing a nurse for the day and noticing that they did not wash their hands in between patient care. This nurse occasionally wore gloves, but used the same ones in between caring for different patients.

Initially I did not fully understand the importance of good hand washing techniques, although I did know that it can lead to infections.

In order for me to formulate the question which I have chosen, I firstly performed a literature search using the key term from the case study, which I decided was hand hygiene. This brought up a wide range of articles, most of which were mentioning the importance of hand hygiene, infection control and hospital acquired infections. These key words, along with the case study aided me in the formulation of my question. In order to answer my question effectively, I decided to use knowledge and Evidence to support me in finding an answer to the question.

Knowledge and Evidence is important when answering questions such as the one I have formulated, because it provides reliable proof, usually in the form of carefully thought out planning and legitimate, credible research. Polit and Beck (2008) wrote that Evidence Based Practice (EBP) is using the best clinical evidence, to make the best decisions regarding a patient's care. They also say that evidence comes from the research done by nurses and other health care professionals. Therefore, In order to find the correct Knowledge and Evidence to support me, I am going to be using literature searches and the university library to find reliable clinical evidence and research to grasp a good knowledge of the issue regarding my question. I decided to use Cinahl and internurse to support me, as from my own personal experiences of using these engines, I believe that they are the best.

As I began my search, I firstly decided to use Cinahl to aid me in finding some relevant evidence to suggest what effects poor hand hygiene have on patients. I used the search terms "hand hygiene", "patient" and "infection". This search brought up 238 results, most of which were very old journals and some did not have relevant information. So before I continued, I decided to narrow my search results. I did this by going to the refine search terms button and by tweaking the search settings. I ticked the full text box and changed the publication year from 1995 to 2010 to 2000 to 2010. I was also on the lookout for articles and journals which had been peer reviewed because it is believed that peer reviewed articles are usually of good quality and credible. This search brought up 18 results, upon looking through them, I realised that once again, the results were not very relevant, this time because they were from different countries and lacked the appropriate information which I required. The one thing that I did notice is that quite a few of the results kept mentioning infection control. So I decided to use this term to refine my search once again, but this time I decided to use internurse and would return to cinahl later.

Once again I searched for "hand hygiene" but this time I added "infection control "and "hospital acquired infections" to my search, and changed the dates to 2000 to 2010. The results which Internurse were of more relevance than Cinahl. So i reviewed several articles from Internurse which I though were the best, and then i went back to Cinahl and use the refined search terms to find some good articles to use and compare with Internurse. Using the refined search terms and the same advanced search settings which I had previously used which was relevant to assisting me in finding an answer to my question, I discovered that both Internurse and Cinahl, although quite difficult to use, brought up articles which were more or less stating the same things.

I wanted to know the amount of infections caught through healthcare were, and some of the reasons that this may be.

The first article which caught my attention was an Infection Control Survey by Gina Rollins (2008). She has included alot of statistics in her article, including a survey showing the main barriers to effective handwashing, which ranges from forgetfulness to believing gloves stop the spread of infection to ignorance of nurses believing that they will not catch any infections from particular patients. She also mentions that good hand hygiene is the single most effective way to reduce the spread of infectious agents onto hands.

I decided that before I continued reviewing the articles that I needed to know more about the possible infections, their severity and how they are spread from patient to nurse.

Rickard (2004) says that healthcare workers (HCW) can transmit microorganisms to patients, causing infections, which are known as healthcare associated infections (HAI). He also says that one third of HAI   can be prevented by HCW adequately washing their hands.  As was discussed in the previous article, it is becoming clear that there seems to be an ignorance regarding hand washing. One thing Rickard (2004) states are that there should be a culture change and hand washing facilities must become more accessible to (HCW).

I still felt that this was not answering my question. It has already become clear that the biggest effect of poor compliance of hand hygiene is the result of patients contracting infections, but i did not know to what extent these infections were and what they were. So I decided to look through more articles, and one thing I noticed is that healthcare acquired infections were also being called different things dependent on who was writing an article. So i went back to cinahl and decided to just put “acquired infections” OR “associated infections” into the search bars, so I could discover more about the infections.

Nancy Turner (2009) writes that between 2006 and 2008, Methicillin-resistant Staphylococcus Aureus (MRSA) and Clostridium Deficile were decreasing. Studies show that handwashing play a primary role in the decrease. She also goes on to mention that Urinary Tract infections and Lung infections were also decreasing due to good handwashing.

HAI affect 9% of patients and costs the NHS 180 million pounds per year in treatment says Emma Burnett (2008). Once again, the fact that the main perpetrator for HAI is non compliance of hand washing.

Helen Scott (2000) mentions that a report from the house of commons, reports that 100,000 cases of HAI are reported each year, and that 5000 of these result in death. She argues that the key to battling the amount of HAI is to educate all healthcare staff on the importance of good hand hygiene and the effects it can have.

It has become abundantly clear to me that the main effects of poor compliance of hand washing result in numerous infections, all of which are very serious and can result in death if undetected and not caught in time. It is also clear that the effects, although they have only been documented as physical in the articles which i have read, may also have a mental effect on patients, especially if they contract a HAI and must remain hospitalised for longer than was initially intended.

I have discovered that Evidence based practice is one of the most important things which all healthcare workers should be familiar with. It helps and aids in important decision making with being a credible and reliable source, usually consisting on plenty of research to show evidence in a particular subject.

In conclusion, this assignment has really opened my eyes to the importance of hand washing, and without evidence based practice and the research available to me, i would not have understood the severity of good hand washing completely. I am now aware that poor hand washing can, in the most severe cases, result in death

I have reviewed several different articles, and picked 5 from the list I had, and have come to the idea that the reasoning behind lack of hand washing between staff is usually because, during a shift, a nurse may feel it is necessary to skip hand washing procedure between dealing with patients to save time, which could be due to staffing levels. Recent studies show that in an average eight hour shift, one hour of a nurse’s time is taken up by hand washing. The alcohol hand rub, which has been introduced has been said to cut that hour by three quarters. The alcohol hand rub can be used up to three to four times in between a complete hand washing using soap and water, on hands which are not visibly soiled.

To me, it seems that staff are either not being educated properly, or may have little understanding of the severity of the absence of good hand hygiene, not just within hospitals, but also in any healthcare setting. I believe that the way forward would be to introduce glow and tell machines to every trust nationwide. I believe that this would make a lot of people realise just how easy it is to miss the microscopic bacteria which inhabit their hands.