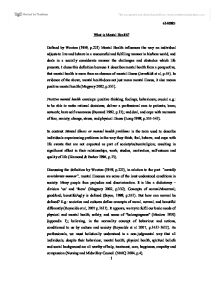 What is mental health?

What is Mental Health?

Defined by Wooton (1959, p.221) Mental Health influences the way an individual adjusts to live and behave in a resourceful and fulfilling manner in his/hers world, and deals in a socially considerate manner the challenges and obstacles which life presents. I chose this definition because it describes mental health from a perspective, that mental health is more than an absence of mental illness (Jormfeldt et al, p.55). In evidence of the above, mental health does not just mean mental illness, it also means positive mental health (Magyary 2002, p.331).

In contrast Mental illness or mental health problems is the term used to describe individuals experiencing problems in the way they think, feel, behave, and cope with life events that are not expected as part of society/culture/religion; resulting in significant affect in their relationships, work, studies, motivation, self-esteem and quality of life (Diamond & Barker 1996, p.13).

Discussing the definition by Wooton (1959, p.221), in relation to the part “socially considerate manner”, mental illnesses are some of the least understood conditions in society. Many people face prejudice and discrimination. It is like a dichotomy – division ‘us’ and ‘them’ (Magyary 2002, p.332). Concepts of normal/abnormal; good/bad; beautiful/ugly is defined (Sayce, 1998, p.331). But how can normal be defined? E.g.: societies and cultures define concepts of moral, normal, and beautiful differently (Reynolds et al, 2007 p.1611). It appears, we try to fulfil our basic needs of physical and mental health, safety, and sense of “belongingness” (Maslow 1970) (appendix 1); believing, in the normality concept of behaviour and actions, conditioned to us by culture and society (Reynolds et al 2007, p.1611-1612).As professionals, we must holistically understand in a non-judgmental way that all individuals, despite their behaviour, mental health, physical health, spiritual beliefs and social background are all worthy of help, treatment, care, happiness, empathy and compassion (Nursing and Midwifery Council (NMC) 2004, p.4).

Mental health illnesses can affect anyone, regardless of age, race, gender or social background. 1 in 4 people will experience some kind of mental health problem in the course of a year. Mixed depression and anxiety is the most common mental health disorder in Britain, to cost the UK around £8bn a year in medication, benefits and lost working days. Depression is estimated to become the second most common cause of ‘disability’, after ischemic heart disease, by 2020 (Mental Health Foundation 2005).

Two main classification systems utilised to diagnose mental health illnesses are: the International Classification of Diseases (ICD-10), by the World Health Organization (WHO), and the Diagnostic and Statistical Manual of Mental Disorders (DSM-IV) by the American Psychiatric Association (APA). These include over 300 different manifestations of mental illness (appendix 2).

According to WHO (1992, p.3), most Mental Health illnesses can be classified as neurotic or psychotic. Disorders referred to as neuroses are frequently called “common mental health problems”. Examples of neurotic illnesses are depression and anxiety. Less common are psychotic disorders or illnesses e.g.: schizophrenia, bi-polar disorder (manic depression), which interfere with a person’s perception of reality, and may include hallucinations such as seeing, hearing, smelling or feeling things that no-one else can.

To identify factors of one common mental health problem, I reflected upon the most common mental health problems experienced by patients in my placement. I selected to focus on depression in cancer patients. To support my discussion and evidence-base my essay, I selected books, related websites, and the biblibiographic databasesCINAHL and PsycINF.

According to Cancer Research UK (2008) up to 58 out of 100 people with cancer develops depression. This highlights the need for a clearer understanding of the different reactions to the presence of cancer, in order to establish effective emotional support. Cancer can affect every area of an individual’s life and have emotional affects e.g.: on relationships, work, spiritual beliefs, body image  (Otto 2001, p.948).

Clinical depression is classified as a Mood Disorder by the APA (1994, p.325), this refers to something very different from the common experience of feeling unhappy and sad. Depressive disorders can be unipolar, (depression only), or bipolar, (periods of deep depression to episodes of mania, characterised by an extreme elevation of mood) (APA 1994, p.325). To be diagnosed with depression patients must experience symptoms of depression for at least two weeks (WHO 1992, p.121). Symptoms can manifest in mood, behaviour, cognition, physically and biologically; and it can vary between Mild: individual can still go on with their daily life; Moderate: have significant impact on the individual daily life; or Severe: daily activities may be almost impossible (WHO 1992, p.119-124). The above will be explored on the practice focus discussion.

In the scenario selected for the practice focus discussion, the patient was given the pseudonym Ron, in order to sustain confidentiality in accordance with NMC (2004, p.4).Ron, a mentally competent 42 year-old man on admission, married with children, was diagnosed with lung cancer. The Doctor explained to Ron and his family, he did not recommend surgery at this stage and prescribed a series of chemotherapy treatments. Through out the weeks Ron developed a continuous sadness; unwillingness and intolerance to engage with staff and family; lost appetite; episodes of tearfulness; lack of memory; and guilt was many times mentioned regarding the future of his family. Regularly Ron reported that his ancestors were visiting him, and they would guide him in this phase. The family around him were willing to support and comprehend his physical and mental condition.

To address Ron’s possible mental health risk factors, Ron’s biopsychosocial nursing assessments were considered: e.g.: Ron’s pre-illness life style; the changes in life style resulting from cancer and its treatment; the activities of daily living; and signs of mental health state recorded in the daily routine evaluations; and the support available from family (Rhoads 2006, p.45-51). Depression can be caused by a combination of biological, psychological and environmental factors. To understanding the individual’s biopsychosocial and holistically is important as, each individual’s state of mind is unique and it can be misread, especially if there are cultural, social or religious differences (Koslander 2007, p. 597). Simply focusing on the symptoms can mean that not enough attention is paid to the person as a whole (Rhoads 2006, p.51).

Ron’s mental health varied across his treatment, in the same way as his physical health did. Depression could have occurred around the time of diagnosis or disappointing news about treatment was given. The daily nursing notes identified that Ron’s mood has been continuously low. Measuring with Otto (2001, p951-961) text book, the following factors might have contributed to Ron’s depression: psychological factors: the trauma from being diagnosed, the uncertainty about the future, the grief for his healthy status and changes in body image. Financial factors: the economic challenges due to the extensive cancer treatment. Environmental and Social factors: the changes in family; and the environmental change when in hospital. Physical/Biological factors: his poor nutrition and possible abnormal balance of chemicals in the brain called neurotransmitters. Chemotherapy treatments may also contribute to changes in well-being and depression (Sacvarsdottir et al 2006, p.468-469).

I took into account the symptomology illustrated by WHO (1992, p.119–120) and I recognise the following manifestations of depression in Ron’s case: Psychological/Mood: his feelings of sadness, hopelessness, low self-esteem, lack of motivation, crying spells and feelings of guilt. Cognitive: his difficulty making decisions, decreased memory (e.g.: inability to remember useful facts of his treatment). Behavioural: social withdrawal and his intolerant towards others.. Physical/biological: feeling sleepy, fatigue and his poor appetite.

I participated with my mentor to a multidisciplinary team (MDT) meeting to discuss Ron’s condition. The MDT attempted to elucidate the difference between a normal depression to the presence of cancer illness and one that would be considered clinical depression. Differential diagnosis: Ron’s physical symptoms of depression can also be caused by the cancer itself or the treatment (Bruce 2007, p.20). Supported by the WHO (1992, p.119) diagnosing clinical depression relies mostly on several core symptoms, including low mood and sleep disturbance. Because of the overlap in physical symptoms, there was more emphasis on Ron’s psychological ‘neurotic’ symptoms such as, crying spells, and hopelessness. The possible ‘psychotic’ manifestations “hallucination” of seeing his ancestor, was related to his spiritual beliefs, having no bearing in the assessment. Ron was referred for Psychiatric assessment and was diagnosed with unipolar moderate depression.

The treatment and interventions put in place to Cope, Alleviate and Solve (Roper et al 2000, p.135) Ron’s mental health condition and Promote Positive Mental Health were: Medication: The doctor selected a serotonin re-uptake inhibitor (SSRI) sertraline, 50 to 100 mg. Therapeutic Interventions: were organized with a Psychotherapist, trained in working with people who experience depression and cancer. Holistic nursing interventions: reducing depression by facilitating emotional support, allowing Ron to share feelings about having cancer; facilitate Religious activities; discuss the positive aspects of treatment and encouragement positive emotions; encourage Ron and family members to learn about his treatment plan, if they wish; provide appropriate physical care while encouraging independence; allow symptoms, such as loss of energy and appetite, could be due to progression of cancer; and help Ron readjust expectations and goals to promote a sense of control (Otto 2001, p.960-966).

In Europe 20-25% of people with cancer experience depression, only 2% receive treatment in the form of antidepressants (Bottomley 1998, p.181-182). In caveat of the above, Depression, just like cancer is an illness that needs to be recognised, named, and treated, as it can have a serious effect if left untreated (Otto 2001, p.951). Possible consequences of depression are: exacerbate the disability caused by cancer (Sacvarsdottir 2006, p. 468-469), the fatigue caused by depression can worsen the fatigue caused by treatments such as Chemotherapy. It impacts on the quality of life, on the person's ability to make good choices about cancer treatments, and undermines the stamina required to undergo treatment (Reuter 2004, p.127-134). Patients whose depression symptoms are so severe can prefer to discontinue their chemotherapy rather than continue to live with their discomfort (Fultcher 2008, p.136).

The role of the nurse is crucial in promoting mental health and in the process of identifying and recognizing mental health problems. Nurses spend maximum time with the patients than any other hospital personnel and therefore, nurses are in a position to assess the psychological reactions of the patients and recognize abnormalities and unusual symptoms in patients. They can recognize, psychological and emotional barriers or needs and plan for appropriate holistic nursing interventionsto assist the patient to maintain strength and cope with unavoidable physiological and psychological problems that accompany the disease (The National Comprehensive Cancer Network (NCCN) 2007).

This essay recognized that Mental health is integral to our overall health and well-being (Krenawi & Graham 2006, p.183), and should be treated with the same urgency as physical health (Long 1998, p.535). The World Health Organization (1986) defines Health as “the physical, mental and social welfare of a person, not just the non-existence of disease or sickness”. I am appreciative of the module one core skills, as it enhanced my skills in communication, compassion and the organizational aspects of care necessary to promote health, including promote positive mental health. It also taught me how mental health is connected with reflective-practice in identifying needs, encouraging self-awareness of aspects known to self and hidden areas (Joharis Window by Luft J (1969) (appendix 3). Mental health plays a crucial role in our patients well-being in our well-being as professional and individuals. Therefore mental health is relevant to my branch adult nursing, to all the other branches of nursing and to all the diverse and associated disciplines,as social workers, psychology, medicine, physiotherapist, with who we work in partnership with to promote health and deliver an efficient care to the public (Tummey 2005, p.14).

Koslander, T., Arvidsson, B., 2007. Patients conceptions of how the spiritual dimentaion is addressed in mental health care: a qualitative study.Journal of Advanced Nursing, Mar, 57 (6), p.597-604.

Maslow, A., 1970. Motivation and Personality. New York: Harper and Row.