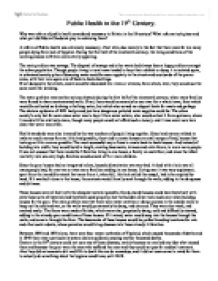 Why was reform of public health considered necessary in Britain in the 19 century? What reforms took place and what part did Edwin Chadwick play in achieving them?

Public Health in the 19th Century. Why was reform of public health considered necessary in Britain in the 19 century? What reforms took place and what part did Edwin Chadwick play in achieving them? A reform of Public health was extremely necessary, if not vital, due mainly to the fact that there were far too many people dying from lack of hygiene. During the first half of the nineteenth century, the living conditions of the working classes in Britain were utterly appalling. The main problem was sewage. The disposal of sewage and other waste had always been a huge problem amongst the urban population. Though people living in rural areas tended to bury their rubbish or dump it in isolated spots, in urbanised society piles of decaying waste could be seen regularly in the streets and courtyards of the poorer areas, with their row-upon-row of back-to-back dwellings. If not dumped in the streets, waste would be discarded into rivers or streams, from which, later, they would use the same water for drinking. The water problem was another serious obstacle during the first half of the nineteenth century, when many families were forced to share contaminated wells. If not, there would commonly be one river for a whole town, from which would be collected as drinking or bathing water, but which also served as a deposit bank for waste and garbage. ...read more.

They were also weak, and cracked easily. The floors were made of bricks, which were also, perpetually damp, cold and difficultly cleaned, adding to the already poor conditions of these houses. If it rained, water would seep into the houses through the walls, and ooze in through the floor. The basements of these houses would be perfect breeding locations for rats and other such rodents, whose parasites would bring diseases into these already ill families. Between 1830 and 1870 alone, there were four mayor outbreaks of Typhoid, which caused thousands of deaths and in 1849 there was a particularly severe cholera epidemic causing another thousand deaths. Doctors in the 19th century could not cure any of these diseases, mainly because no one had any idea what caused them and because the poor were the ones who suffered the most and they could not pay for medical treatment. Also they did not associate dirt and filth to death like we do nowadays, and it did not even come to mind for them to actually do something about the hygiene conditions; until 1848. As a result of a growing Sanitary Reform Movement, parliament passed a series of acts in an attempt to improve sanitary conditions in urban areas. Edwin Chadwick was largely responsible for the 1834 Poor Law Amendment Act, which brought both him and the Government fierce criticism, but his thoughts were turning more and more towards sanitation. ...read more.

Chadwick worked tirelessly for the Board of Health, but the enemies of centralised administration and intervention were determined. In 1854, he was pensioned off from public service but continued to campaign for sanitary and social reform. His wide knowledge of government departments, administration and statistics, public health engineering and building construction made him a formidable campaigner for the last years of his life. In 1875, Britain saw the emergence of the Disraeli Public Health Act, or Artisans act. The Public Health Act of 1875 was the first act that forced local authorities to improve on public health. The main improvements in Public Health were: * Better diet was made possible. * Cheap, new chemicals, and cheap cotton clothing was made available. * Better medicines were developed and better hospitals were built. This 1875 Act led to the change of power from central to local government, even in the urban areas, greatly improving the situation. Local authorities had to pay for all services, with taxes, such as the clearing slums and the construction and maintenance of public areas like parks, public houses and even hospitals. This mobilisation paid off in end as the deaths because in infectious diseases lowered to 10% in 1900. It also allowed for a large clearance of slums in England. ...read more.