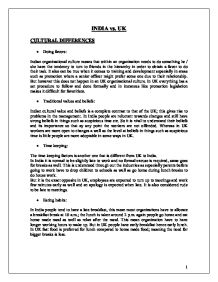 INDIA vs. UK CULTURAL DIFFERENCES * Doing favors: Indian organizational culture means that within an organization needs to do something he / she have the tendency to turn to friends in the hierarchy in order to obtain a favor to do their task. It also can be true when it comes to training and development especially in areas such as promotion where a senior officer might prefer some one due to their relationship. But however this does not happen in an UK organizational culture. In UK everything has a set procedure to follow and done formally and in instances like promotion legislation makes it difficult for favoritism. * Traditional values and beliefs: Indian cultural value and beliefs is a complete contrast to that of the UK; this gives rise to problems in the management. In India people are reluctant towards changes and still have strong beliefs in things such as auspicious time etc. So it is vital to understand their beliefs and its importance so that ay any point the workers are not offended. Whereas in UK workers are more open to changes a well as the level at beliefs in things such as auspicious time is little people are more adoptable in some ways in UK. ...read more.

Uncertainty Avoidance (UAI) It measures the level of tolerance for uncertainty and ambiguity within the society. The score for uncertainty avoidance is more or less the same in the U.K 40 and India 35. In the past organizations in both in India and UK have been very traditional i.e Marks & Spencer. Changes in market however i.e increased competition has however forced the organizations to be more dynamics and thus people in both countries have begun to adapt changes. Uncertainty avoidance has decreased is not very high in both countries This means that people have less concern about ambiguity and uncertainty and have more tolerance for a variety of opinions. People accept changes and take risks for example with restructuring of the organization. This is good for the organisation as with the fast changing market of India they will have to make changes to remain competitive. Since the level of uncertainty avoidance is more or less same in India and UK they will have to make little changes in terms of this aspect. Long Term Orientation (LTO) It measures the degree the society embraces, or does not embrace, long-term devotion to traditional, forward thinking value. There is a wide variation between U.K and India when it comes to long-term orientation, India 61 and U.K 25. ...read more.

The organization hear might want to consider using short shifts which are less than six hours as well as bringing in part time staffs who can provide cover while the breaks are being taken. Weekly rest period requires the employer to provide the employee with a minimum of 24 hours uninterrupted break for every seven working days on top of the breaks between shifts. For an Indian company it might have been a norm to have their employees working seven days a week, but this is not possible in the EU. Again to over come this the answer would be to use part time staffs, temporary staffs as well as shift works. Some of the other aspects of this directive cover employees in terms of their annual leave as well as night work. The Indian organization coming in to UK has to make sure they follow all the set procedures. The best way to make sure that they do this is by having a work force that will consist of part time workers and temporary staffs, which they might not have used in India. Also it must have a clear procedure in terms of annual leaves and night work to indicate to their employees what they are entitled to as well as a procedure in place to book holidays. 1 ...read more.