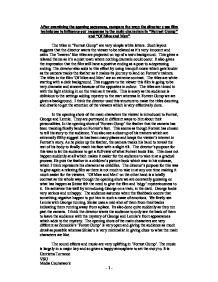 After examining the opening sequences, compare the ways the director s use film techniques to influence our responses to the main characters in &quot;Forrest Gump&quot; and &quot;Of Mice and Men&quot;

After examining the opening sequences, compare the ways the director s use film techniques to influence our responses to the main characters in "Forrest Gump" and "Of Mice and Men" The titles in "Forrest Gump" are very simple white letters. Such layout suggests that the director wants the viewer to be relaxed as it's very innocent and calm. The 'heaven' like titles are projected on top of a town background. This gives a relaxed theme as it's a quiet town where nothing dramatic could occur. It also gives the impression that the film will have a positive ending as a pose to a depressing ending. The director also adds to this effect by using tranquil music which gets louder as the camera tracks the feather as it makes its journey to land on Forrest's trainers. The titles in the film 'Of Mice and Men' are an extreme contrast. The titles are white starting with a dark background. This suggests to the viewer this film is going to be very dramatic and sincere because of the opposites in colour. The titles are timed in with the light shining in on the train as it travels. ...read more.

The sound effects and music are very uplifting in 'Forrest Gump'. The music is largely in a major key and so gives a happy atmosphere to set the story to. It is gentle and light at the beginning of the film to show that its not going to be a film of mystery or danger, but of happiness. The music then crescendos when the feather almost hits the car and diminuendos when the feather lands by Forrest's foot. The director's purpose by using that effect is to tell the audience to focus their attention on him. Overall, the music was nothing dramatic do to give a 'homely' environment. However, the music from 'Of Mice and Men' is a total opposite as the music through out the opening scenes is in a minor key, therefore giving a sense of danger and unhappiness. We can see that it is not going to be a light hearted film. As we start to see the inside of the train where George is sitting, the music dies down by the time the camera has moved to show a close-up of his face drawing the audience's attention directly to George. ...read more.

The dialogue in 'Of Mice and Men' differs drastically to 'Forrest Gump' as it lacks in details about the characters and tends to be very short lines. The short lines give the affect of drama and mystery. Even though the lines are not as full as Zeneckis's film they still give you clues that tend to be a little less obvious. When we see George and Lennie running away from the lynch mob, we hear their first interaction of the film. George orders Lennie to run faster and has to push him forward to help. This immediately portrays George as the stronger of the two as he is the one asking Lennie to run faster, giving him a master figure. Lennie is also given the role of the follower. George as he speaks has an anxious tone in his voice which indicates that they have done something wrong. Lennie on the other hand seems oblivious and doesn't know why they are running away or why George seems so anxious. This indicates that like Forrest Gump, he may be mentally challenged as it seems he is in another world. ?? ?? ?? ?? Henrietta Torrance VSG Media Coursework - 1 - ...read more.