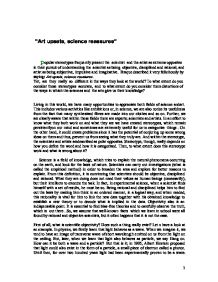 "Art upsets, science reassures" popular stereotypes frequently present the scientist and the artist as extreme opposites in their pursuit of understanding the scientist as being objective, disciplined and rational, and artist as being subjective, impulsive and imaginative. Braque described it very felicitously by saying: Art upsets, science reassures. Yet, are they really so different in the ways they look at the world? To what extent do you consider these stereotypes accurate, and to what extent do you consider them distortions of the ways in which the sciences and the arts give us their knowledge? Living in this world, we have many opportunities to appreciate both fields of science andart. This includes various activities like exhibitions or, in science, we are also notice its usefulness from the fact that many synthesized fibres are made into our clothes and so on. Further, we are clearly aware that within these fields there are experts; scientists and artists. In an effort to know what they both work on and what they are we have created stereotypes, which remain persistentlyon our mind and sometimes are extremely useful for us to categorize things . On the other hand, it could create problems since it has the potential of conjuring up some wrong ideas on them and thus, prevent us from seeing what they truly are. And within the stereotype, the scientists and artists aredescribed as polar opposites. ...read more.

But biological experiments often have more difficulties than physics or chemistry also due to the fact that the object being tested are alive and it cannot be in a universal way during all the investigation continues. They are less mechanical than chemicals, which we use in chemistry, or electrical circuits in physics. We know that biology experiment do not always work. Variables cannot be controlled and the modern biologists expect a percentage of exceptions . Therefore, he must have selected relevant data only to show that his theory works universally. This, too, cannot be said as being objective- rather, he sort of knew what should happen and manipulated the results to have the exact number as in the ratios, which are stated in his laws. But both revolutionary art and visionary physics are investigations into the nature of reality, both experts sharing the desire to investigate the ways in the interlocking pieces of reality fit together. In fact, great scientists have always relied on intuition and imagination. That is why new ideas sprung from looking at old facts in a new way. This means that there is no way to look at facts objectively- in a new way- because there is only one objective way . Total objectivity must be something sterile and uncreative (thus not stimulating!). We saw that science was not absolutelyobjective as we thought. Then can the same thing be referred to stereotype of artist as well? ...read more.

Instead, his form exists in a universal light in the sense of directed rays from a single source. Light which is uniform and enduring, steady, strong and clear. Cezanne challenged Western culture s assumptions regarding the nature of light by eliminating the angle of declination that had prevailed in previous arts. In doing so, he also called into question the assumptions about the other two constructs, space and time. This idea, indeed, fitin exactly with the new conceptions of space, time and light that were to be elaborated by a physicist in the early years of the twentieth century. Looking through these facts, the surprising thing is that in order to have new knowledge, we should look at the world in different way than before and to do this, both artists and scientists actually need to be imaginative. That is why revolutionary artists like the three mentioned above and revolutionary physicists managed to investigate so far as we know. Further, the fact that revolutionary artists had these ideas before anyone else tells us that if anything new is to be discovered, then it could be no one but them. Therefore, we see that the widely prevailing stereotypes prevent us from seeing what exactly scientists and artists are like. Although to some extent the stereotype may be even helpful to categorize them and especially living through our daily life, it could also provide us the danger of not seeing the true aspects of these two types of people. Dawid Namyslak ?? ?? ?? ?? 1 ...read more.