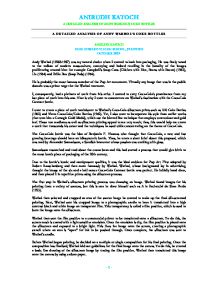 A DETAILED ANALYSIS OF ANDY WARHOL'S COKE BOTTLES ANIRUDH KATOCH KING EDWARD VI HIGH SCHOOL, STAFFORD OCTOBER 2004 Andy Warhol (1928?-1987) was my natural choice when I wanted to look into packaging. He was finely tuned to the tedium of modern mass-culture, conveying and indeed revelling in the banality of the images proliferating around him: for example Campbell's Soup Cans (Chicken with Rice, Beans with Bacon) (1962), Liz (1964) and Brillo Box (Soap Pads) (1964). He is probably the most famous member of the Pop Art movement. Virtually any image that was in the public domain was a prime target for the Warhol treatment. I, consequently, had a plethora of work from this artist. I wanted to carry Coca-Cola's prominence from my last piece of work into this one. That is why I want to concentrate on Warhol's fascination with the Coca-Cola Contour bottle. I want to create a piece of work reminiscent to Warhol's Coca-Cola silkscreen prints such as 210 Coke Bottles (1962) and Three Coca-Cola/Coke Bottles (1962). Yet, I also want to incorporate his style from earlier works (that won him a Carnegie Gold Medal), which use the blotted line technique that employs watercolour and gold leaf. These two mediums as well as silkscreen printing appeal to me very much; thus, this would help me create a work that transcends his career and the techniques he used while concentrating on the theme of Coca-Cola. ...read more.

Warhol had the merit to understand, before others, that the Coca Cola bottle was the fundamental emblem of American (and international) mass culture that could be assumed to be a symbol of one entire age. Here he describes the importance of the Coca-Cola bottle in society (1975): You can be watching TV and see Coca-Cola and you know that the President drinks Coke, Liz Taylor drinks Coke, and just think, you, can drink Coke too. A Coke is a Coke and no amount of money can get you a better Coke than the one the bum on the corner is drinking...Liz Taylor knows it, the President knows it, the bum knows it, and you know it. The first appearance of Warhol's "Coke" bottle was in 1962, so I wanted to look at his Three Coke Bottles (1962) work. This piece of artwork is more interesting because one can see the gradual evolution of Warhol's technique, which refined through time. Hence, by looking at a raw piece of work one can see Warhol's perception of the subject. Comparing his work from the 60s and the 80s can immediately identify this. In addition, I wanted to concentrate on a piece of work, which used "big, simple designs". There are three translucent green bottles and there is a large Coca-Cola logo, in red, underneath. ...read more.

I think everybody should be a machine". The silk-screen images expressed the mood of repetition, banality and insipidness, which underlies a consumerist perception of the world. Unfortunately, this is exact opposite of how I created my image. Each one was painstakingly made, and created to be ironically beautiful which goes against Warhol's ideology. Yet, I find this interesting: how the same effect can be created either way. He "churned" out his works (products) like a manufacturer, going as far as naming his studio 'The Factory'. Thus, Warhol's work was intent on dehumanising his subjects whether they are images purloined from mass-culture or depictions of atrocities such as car crashes. Warhol raised monotony to new heights, as he said at the time, "I like boring things". Warhol always said that "If you want to know all about Andy Warhol, just look at the surface of my paintings and films and me, and there I am. There's nothing behind it." I find that quite sad and actually quite depressing but I feel there is more to Warhol than he says; he calls himself "very superficial", but artworks such as Tuna Fish Disaster (1963) and Electric Chair (1971) show a much darker, eerie mindset. The use of fresh, fluorescent colours such as hot pinks and acid blues tinting pictures of electric chairs or car crashes (many times repeated) really puts Warhol as one of the most important artists of the 20th century. ?? ?? ?? ?? ANIRUDH KATOCH A DETAILED ANALYSIS OF ANDY WARHOL'S COKE BOTTLES - 1 - ...read more.