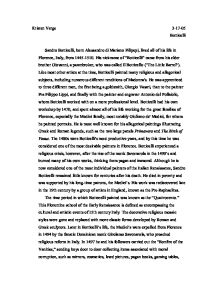 A discussion on Sandro Botticelli.

Kristen Verge 3-17-05 Botticelli Sandro Botticelli, born Alessandro di Mariano Filipepi, lived all of his life in Florence, Italy, from 1445-1510. His nickname of "Botticelli" came from his elder brother Giovanni, a pawnbroker, who was called Il Botticello ("The Little Barrel"). Like most other artists at the time, Botticelli painted many religious and allegorical subjects, including numerous different renditions of Madonna's. He was apprenticed to three different men, the first being a goldsmith, Giorgio Vasari, than to the painter Fra Filippo Lippi, and finally with the painter and engraver Antonio del Pollaiolo, whom Botticelli worked with on a more professional level. Botticelli had his own workshop by 1470, and spent almost all of his life working for the great families of Florence, especially the Medici family, most notably Giuliano de' Medici, for whom he painted portraits. He is most well known for his allegorical paintings illustrating Greek and Roman legends, such as the two large panels Primavera and The Birth of Venus. The 1480s were Botticelli's most productive years, and by this time he was considered one of the most desirable painters in Florence. ...read more.

As part of the intellectual and artistic circle at the court of Lorenzo de' Medici, Botticelli was also influenced by its Christian Neoplatonism, "a fusion of pagan and Christian themes and elevation of pursuit of beauty as a fundamental element of art." Sandro Botticelli developed a highly personal style, characterized by an elegant execution, a sense of melancholy, and a strong emphasis on line. The forms in his paintings are defined with a sharp and flowing line, with the ability to suggest the character and even the mood of the figures by action, pose, and facial expression. The Virgin Mary is always a tall, queenly figure in conventional red robe and blue cloak, with an inner pensiveness of expression. Botticelli also harnessed the use of linear perspective, as most of his contemporaries were also able to do, and has been credited with a sophisticated understanding of perspective of the human body and anatomy. After the early 1490s-and his encounter with Savonarola-his style changed-- the paintings are smaller in scale, the figures in them are much more slender, accentuating their gestures and expressions and concentrating attention on an urgency of action. One of his two most famous paintings, La Primavera, was completed in 1482. ...read more.

The goddess of spring stands on shore to welcome Venus to the Earth. Botticelli's figures form a harmonious pattern with their graceful movements and lines, making them look airy and less solid. Venus's neck is an unnatural length in proportion to the rest of her body, and her steeply falling shoulders hide the strange way her left arm is hinged to her body. To counter criticism for creating a seemingly pagan image, Botticelli made the Gods look like Christian angels and leaves the beautiful portrait of Venus open for interpretation as a symbol of both pagan and Christian love. Although Botticelli's style seems to change drastically over time, I like the soft colors which he uses in the 1480's and his choice of depicting Greek and Roman myths rather than the common Christian stories. I also like the beautiful and delicate costuming he chose for his characters, and the delicate way he painted their features. The detail in some of his paintings makes them seem more like still-life's than creations from his imagination. His later, more religious images seem fanatical and bizarre, and don't interest me as much as his earlier works. ...read more.