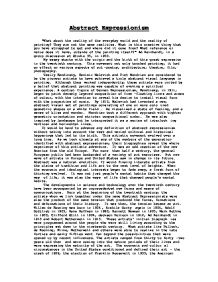 Abstract Expressionism "What about the reality of the everyday world and the reality of painting? They are not the same realities. What is this creative thing that you have struggled to get and where did it come from? What reference or value does it have, outside of the painting itself?" Ad Reinhardt, in a group discussion at Studio 35, in 1950. My essay starts with the origin and the birth of this great expression in the twentieth century. This movement not only touched painting, it had an effect on various aspects of art-poetry, architecture, theatre, film, photography. Vasily Kandinsky, Kazimir Malevich and Piet Mondrian are considered to be the pioneer artists to have achieved a truly abstract visual language in painting. Although they worked independently, these artists were united by a belief that abstract painting was capable of evoking a spiritual experience. A central figure of German Expressionism, Kandinsky, in 1911, began to paint densely layered composition of free-floating lines and areas of colour, with the intention to reveal his desire to install visual form with the properties of music. By 1915, Malevich had invented a new, abstract visual set of paintings consisting of one or more coloured geometric shapes on a white field. ...read more.

By a clearer understanding it revealed that Abstract Expressionism flourished due to some reliable understanding of the painters' formal and technical concerns and their relationship to previous art. Unlike European tradition, American art had no classical roots. In the mainstream America art has not been monumental and decorative, but basically popular and realistic. After giving primary debt of the Abstract Expressionism to the European art, the artists managed to preserve some unique and compelling qualities of American expression. These included boldness of imagery, directness of technique, stress on the material physicality of medium and surface, and sincerity of statement. Abstraction embodied the intellectual achievement and adventurous outlook of the twentieth century, along with other technological breakthroughs. Evolving after photography had proven its ability to capture appearances, abstract expressionism in every walk of art conveyed that could not be captured through a set of lens. It gave complete freedom from conventional concerns and restrains, which led to unobstructed expressiveness and individual exhalation. Even though the work may seem spontaneous, abstract artists employed highly calculated methods. The relationship between abstract art and modern architecture was particularly strong. Many painters paid homage to architectural principles in their compositions. ...read more.

Film, just like photography depends not only on mechanical devices, but also is able to stimulate motion. An earliest adventure into abstract film-making was made by Hans Richter who created animated works which consisted of geometric forms arranged according to the laws of chance. He derived from a series of experiments called scroll pictures with variations on formal themes drawn in pencil on long rolls of paper. His interest in painting and drawing led to his investigation of film making. Abstract expressionism was the combination of idealism and spirituality- two great schools of thought. I would sum up this essay by quoting from Willem de Kooning describing what abstract art means to him in 1951. He saw it as a an art of spiritual harmony in which all the main characters flew away from the painful realities of life. He said, " Their own sentiment of form instead was one of comfort. The beauty of comfort. The great curve of a bridge was beautiful because people could go across the river in comfort. To compose in curves like that, and angles, and make works of art with them could only make people happy, they maintained, for the only association was one of comfort. That millions of people have died in war since then, because of that idea of comfort, is something else." ...read more.