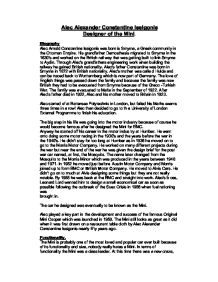 alec issigonis and the design of the mini cooper

Alec Alexander Constantine Issigonis Designer of the Mini. Biography Alec Arnold Constantine Issigonis was born is Smyrna, a Greek community in the Ottoman Empire. His grandfather Demosthesis migrated to Smyrna in the 1830's and worked on the British railway that was getting built to link Smyrna to Aydin. Through Alec's grandfathers engineering work when building the railway he gained British nationality. Alec's father Constantine was born in Smyrna in 1872 with British nationality. Alec's mother was called Hulda and can be traced back to Wurttemberg which is now part of Germany. The love of English things was passed down the family and because the family was now British they had to be evacuated from Smyrna because of the Greco-Turkish War. The family was evacuated to Malta in the September of 1922. After Alec's father died in 1922, Alec and his mother moved to Britain in 1923. Alec started of at Battersea Polytechnic in London, but failed his Maths exams three times in a row! Alec then decided to go to the University of London External Programme to finish his education. The big step in his life was going into the motor industry because of course he would become famous after he designed the Mini for BMC. Anyway he started off his career in the motor industry at Humber. ...read more.

There was a couple of technical difficulties during the design and manufacture of the Mini Cooper just like any other car. The first thing was that BMC who made the Mini asked the oil companies to set to work in finding an oil that could be shared between both the engine and the gearbox. The second thing was the tyre problem. The British Motor Company asked Dunlop Tyre Company if they could develop a tyre that would last more than 5,000 miles that they could put on the Mini. 5,000 miles must have been a good life for a tyre at the time but nowadays that is nothing for a car tyre because the technology has come on so far. What was the Minis purpose? The main purpose of the Mini was to break in to the market of the bubble car. At the time the bubble car in Britain was like the Ford Focus is nowadays. Extremely popular and liked by most. The bubble car was so popular because it was fuel efficient and cheap to run. People wanted fuel efficient cars at the time because of the Suez Crisis and petrol rationing in Britain at the time. Leonard Lord, the man in charge of BMC, saw the chance of breaking into this market and wanted to design a car that would not only compete with the bubble car but run it off the road. ...read more.

In terms of interior it had a steering wheel, speedometer and a couple of other important switches on the dashboard. The Mini was an extremely well built hand made car made by highly skilled engineers in England. What do you think of the product/design, would you buy it and why? I think the Mini is a great car and the design of it is unique. No other car is like a Mini. Two years and one month after the prototype was first driven by boss Leonard Lord the car was given the thumbs up. The car was launched in two versions and at first was not called the Mini. The two versions were the Morris Minor and the Austin Se7en, (seven). Soon after it was coming off the production line and has been a great success story ever since. It has also been a great success on the racing front as has won many medals and other awards. Especially in rally style racing where it has been a class leader and still is, although today it is not used anymore in professional rally many people choose to buy a Mini if they want to start amateur rallying. This just shows how versatile the Mini was and how the car is still going today. I like the Mini very much and if I had enough money and I was old enough I would probably buy one because they are cool, sporty and small. Great for all ages. ...read more.