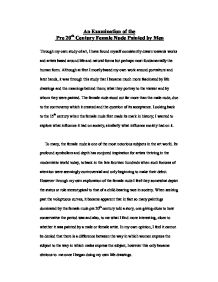 An Examination of the Pre 20th Century Female Nude Painted by Men Through my own study of art, I have found myself consistently drawn towards works and artists based around life and natural forms but perhaps most fundamentally the human form. Although at first I mostly based my own work around portraiture and later hands, it was through this study that I became much more fascinated by life drawings and the meanings behind them; what they portray to the viewer and by whom they were painted. The female nude stood out far more than the male nude, due to the controversy which it created and the question of its acceptance. Looking back to the 15th century when the female nude first made its mark in history; I wanted to explore what influence it had on society, similarly what influence society had on it. To many, the female nude is one of the most notorious subjects in the art world. Its profound symbolism and depth has conjured inspiration for artists thriving in the modernistic world today, to back in the late fourteen hundreds when such focuses of attention were seemingly controversial and only beginning to make their debut. However through my own exploration of the female nude I feel they somewhat depict the status or role stereotypical to that of a child-bearing race in society. When seeking past the voluptuous curves, it became apparent that in fact so many paintings dominated by the female nude pre 20th century told a story, one giving clues to how conservative the period was and also, to me what I find more interesting, clues to whether it was painted by a male or female artist. In my own opinion, I feel it cannot be denied that there is a difference between the way in which women express the subject to the way in which males express the subject, however this only became obvious to me once I began doing my own life drawings. ...read more.

The idea is consumed around dignity as though it is inappropriate for a woman in a society to stand 'nude.' Furthermore, following the flowery essence portrayed in 'The Birth of Venus' which one could insinuate to be beauteous, it is obvious Renoir wanted to capture the same concept. This is not only apparent in 'The Bather' but in fact Renoir aspired to beget this in the entirety of his work as quoted, "Why shouldn't art be pretty? There are enough unpleasant things in the world."2 Although I have never seen 'The Bathers (after the bath)' I have seen other pieces of his work. One work that struck me in particular and reminded me of the piece I am focusing upon, was 'Young Girl Bathing,' 1892 which I came across on a visit to the Metropolitan Museum of Art. Although the positioning is slightly less coy, the way in which Renoir chose to paint, reflects the delicates of the female form. When moving through a crowded room I was automatically drawn towards this painting. From afar, the painting looked blurred, as though in a sense, the artist was still trying to hide the subject matter, again hinting that the female nude during the time was still not looked at comfortably. However, when I got closer, I realised that the Tash in fact added to the beauty of the female form. When right up close to the painting, the beauty struck me, and I became less aware of the people around me, however the fact that there were hundreds of tourists surrounding the art work hindered my experience and I feel tainted my opinion. Viewing the art work today is a very different experience than viewing it when it was created. We are built up to have expectations of art, whereby we are indoctrinated with our society's opinions. Therefore, although to me there is nothing erotic about Renoir's work, I still question it, in the same way I could see all the other tourists were. ...read more.

Important to note, these influential figures were predominantly male. This most obviously reflects a male dominated society, but also suggests that art was being tailored for the likes of males. As I have continually expressed, to a female such paintings as 'The Birth of Venus' represent fertility, but as these paintings were commissioned for men, it is more probable that the works were created to demonstrate sexuality and eroticism. Therefore, when examining the female nude, there are a lot of mixed views on what it represents. One's opinion is heavily influenced by their own sex, and as well, the society in which they are viewing the work. Being a female in the twenty first century, to me the female nude merely represents nature and fertility. However, when examining the works of male artists prior to the 21st century, I get the impression they were more hesitant to portray the female nude naturalistically. People were made to believe the female nude was sinful, as it merely reflected sexuality and eroticism. Of course it would be unfair to suggest the works have nothing to do with this due to the fact, most painters were males, whom were painting for males. Which is why, perhaps many males today would probably still believe the paintings had much more to do with sexuality than fertility. One thing I can be sure of, is the female nude poses a lot of questions as people share such different opinions of what the subject signifies. This is why I believe the female nude is one of the most interesting subjects in the art world today. It represents a development in society, shows how people are becoming less embarrassed of the human body, and how woman are becoming more influential figures in society. Whitney Museum of American Art PS1 Gallery MoMA: The Museum of Modern Art Metropolitan Museum of Art Tate Britain Tate Modern National Gallery National Portrait Gallery Galleria del'Accademia Webography http://en.wikipedia.org/wiki/The_Birth_of_Venus_(Botticelli) http://www.tate.org.uk/ http://www.cartage.org.lb/en/themes/Arts/painting/renaiss-paint/early-rennais/earlyrenaiss/earlyrenaiss.htm http://renaissance-art.suite101.com/article.cfm/meaning_in_the_birth_of_venus http://www.abcgallery.com/R/renoir/renoir55.html http://www.tamsquare.net/thumbnail/R/Pierre-Auguste-Renoir-The-Bather-(After-the-Bath)-.jpg http://www.aiwaz.net/from-breast-to-beard-story-of-renaissance/a63 http://quote.robertgenn.com/auth_search.php?authid=429 http://www.weichtiere.at/Mollusks/geschichten/venus. ...read more.