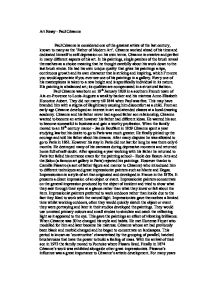 Art Essay - Paul C�zanne Paul C�zanne is considered one of the greatest artists of the last century, known to many as the 'Father of Modern Art'. C�zanne worked ahead of his time and dedicated himself to self-depression on his own terms. C�zanne is creative and perfect in many different aspects of his art. In his paintings, single patches of the brush reveal themselves as a choice meaning that he thought carefully about his work down to the last brush stroke. He had his own unique quality that gives his paintings a ripe, continuous growth and its own character that is striking and inspiring, which I'm sure you would appreciate if you ever see one of his paintings in a gallery. Every one of his masterpieces is taken to a new height and is specifically individual in its nature. His painting is a balanced art; its qualities are compensated in a structural fashion. Paul C�zanne was born on 19th January 1839 in a southern French town of Aix-en-Provence to Louis-Auguste a wealthy banker and his mistress Anne-Elisabeth Honorine Aubert. ...read more.

After spending a year working with his father he returned to Paris but failed his entrance exam for the painting school - Ecole des Beaux-Arts and the Salon (a famous art gallery in Paris) rejected his paintings. However thanks to Camille Pissarro (a sort of father figure and mentor to C�zanne) who introduced him to different techniques and great impressionist painters such as Mante and Degas. Impressionism is a style of art that originated and developed in France in the 1870s. It presents a direct impression of an object or event. Impressionist painters concentrate on the general impression produced by the object of incident and tried to show what they saw through their eyes at a glance rather than what they knew or felt about the item. Impressionist painters preferred to work outdoors rather than inside due to the fact they liked to work with the natural light. Impressionists gave themselves a limited time whilst working outdoors, often they would quickly sketch the object or event they were portraying and later in their studios developed the paintings. ...read more.

He cut himself off from the outer world living the life of a recluse. Finally in his late fifties C�zannes work started to attract attention it deserved. Ambroise Vollard (a renowned art dealer) displayed some of C�zannes work in Paris and eventually bought every painting from C�zanne's studio in 1897. In C�zannes later life he studied the same subjects over and over again trying out different techniques. One of his favourite subjects was 'The Great Bathers'. On the 22nd October 1906 C�zanne died of pneumonia after getting soaked in a storm. Like many famous painters fame came after their deaths and Paul C�zanne unfortunately experienced this. C�zanne's work demonstrates beautiful and inspiring masterpieces. Through his life there were many down falls and painful struggles and we can see this in his work. His early life shows many signs of destructiveness, depression and black moods, which are almost certainly expressed in his works. The accent relating to his moods can be seen to lift with his later works ranging from the dark depressive early days to the bright colour and tones he incorporated in his latter days. He is beyond a doubt a Father of Modern Art. ...read more.