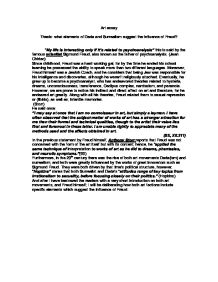 Art essay Thesis: what elements of Dada and Surrealism suggest the influence of Freud?

Art essay Thesis: what elements of Dada and Surrealism suggest the influence of Freud? "My life is interesting only if it's related to psychoanalysis" this is said by the famous scientist Sigmund Freud, also known as the father of psychoanalysis. (Jean Chiriac) Since childhood, Freud was a hard working gal, for by the time he ended his school learning he possessed the ability to speak more than two different languages. Moreover, Freud himself was a Jewish Czech, and he considers that being Jew was responsible for his intelligence and discoveries, although he weren't religiously attached. Eventually, he grew up to become a psychoanalyst, who has endeavored theories related to hysteria, dreams, unconsciousness, transference, Oedipus complex, narcissism, and paranoia. However, we are prone to notice his indirect and direct affect on art and literature, for he endeared art greatly. Along with all his theories, Freud related them to sexual repression or (libido), as well as, infantile memories. (Storr) He said once: "I may say at once that I am no connoisseur in art, but simply a layman. I have often observed that the subject-matter of works of art has a stronger attraction for me than their formal and technical qualities, though to the artist their value lies first and foremost in these latter. I am unable rightly to appreciate many of the methods used and the affects obtained in art. ...read more.

At that time the world was facing a plaque (Storr 40-41) Therefore, we are able to conclude from the previous section, that Freud committed several attempts to interpret dreams. Consequently, he was able to infer and clarify the use of dreams in neurosis. However, we are prone to realize the irony in Freud's attempt to research dreams; for Freud's personal dreams were his sole objective which eventually persuaded him to investigate them, and this is evident in the previous paragraph. Freud's dream theory consisted of the following: He claimed that usually dreams were "disguised hallucinatory fulfillments of repressed wishes". And, by wishes, we not only refer to the fulfillment of current wishes, but also to the wishes which age from childhood.(Storr 44-45) Freud said: "Our theory of dreams regards wishes originating in infancy as the indispensible motive force for the formation of dreams" (SE, V.589) Freud believed that dreams were "guardians of sleep". For, when someone goes to sleep he is detached from reality by disengaging all sorts of external influences, like light, urge to urinate, numb of leg or head, cough... etc. moreover, the dreamer is said to be severed from the internal stimuli as well such as emotions to cry, anxiety, fear, happiness. Hence, Freud states that when the mind needs to protect the body from external and internal stimuli it begins to manufacture dreams. (Kevin) ...read more.

(Storr 91) Freud believed that the only motivation of such a talent which has been projected through forms of art, where all persuaded by the libido (sexual drive). Therefore, Freud believed that artists "discharged their infantile sexuality by converting it into non-instinctual forms".(92) Freud has mentioned that artists are people that "avoid neurosis and perversion by sublimating their impulses in their work". (92-93) Into the bargain, we interpret that Freud has applied his theory of dream on art because he was interested in the content of it, and not in its form. He said that art is the manifest content while the latent content derives from aggression, love of fame, wealth, and sexual drive, and infantile suppressed wishes. He said once, quoting his words: "An artist is once more in rudiments an introvert, not far removed from neurosis. He is oppressed by excessively powerful instinctual needs. He desires to win honour, power, wealth, fame, and love of women; but he lacks the means for achieving these satisfactions. Consequently, like any other unsatisfied man, he turns away form reality and transfers all his interest, and his libido too , to the wishful constructions of his life of fantasy, whence the path might lead to neurosis." (101) As well, Freud believes that art is derived from wishes, and this could be projected through dreams he says: "We may lay it down that a happy person never fantasies, only an unsatisfied one. The motive forces of fantasies are unsatisfied wishes." (101) Dada and Freud: ...read more.