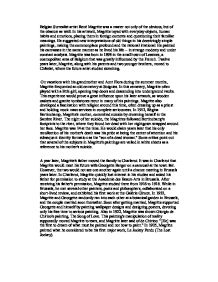 Belgian Surrealist artist Ren� Magritte was a master not only of the obvious, but of the obscure as well. In his artwork, Magritte toyed with everyday objects, human habits and emotions, placing them in foreign contexts and questioning their familiar meanings. He suggested new interpretations of old things in his deceivingly simple paintings, making the commonplace profound and the rational irrational. He painted his canvasses in the same manner as he lived his life -- in strange modesty and under constant analysis. Magritte was born in 1898 in the small town of Lessines, a cosmopolitan area of Belgium that was greatly influenced by the French. Twelve years later, Magritte, along with his parents and two younger brothers, moved to Ch�telet, where the future artist studied sketching. On vacations with his grandmother and Aunt Flora during the summer months, Magritte frequented an old cemetery at Soignies. In this cemetery, Magritte often played with a little girl, opening trap doors and descending into underground vaults. This experience would prove a great influence upon his later artwork, as wooden caskets and granite tombstones recur in many of his paintings. Magritte also developed a fascination with religion around this time, often dressing up as a priest and holding mock mass services in complete seriousness. ...read more.

In 1927, he held his first one-man show at the Gal�rie Le Centaure. While the show flopped and Magritte received much harsh criticism, the gallery's continued sponsorship allowed Magritte to further hone his artistry. Magritte then moved to Paris to work alongside other Surrealists. During this time, he painted many bizarre and macabre scenes. A classic example of Magritte's work at this time is his 1926 painting, L'Assassin Menac� (The Threatened Assassin). While in Paris, Magritte became acquainted with much of Surrealist theory, including their romanticized notions of scandal, crime and disguise. However, disgusted by the superficial methods of the Parisian Surrealists and their dependence on dreams, drugs and magic for vision, Magritte moved back to Brussels three years later. Upon returning to Brussels, though, Magritte came in contact with more Surrealists. One night, utterly sickened by the group of artists, Magritte burned all possessions reminding him of his connections with Surrealism. Ironically, although Magritte's personal connections with and faith in Surrealism were tenuous, his eye-catching artwork remained clearly Surrealistic in style. As a result, he was represented and recognized in all of the important Surrealism exhibitions of the 1930s. Moreover, as Surrealism gained more and more attention and esteem, Magritte's artwork also became more and more exposed and distinguished throughout the world. ...read more.

He caricatured Fauvist art in his portrayal of awkwardly erotic women and the use of quick, furious brushstrokes. Magritte wished to annoy the French public, whom he saw as egotistically self-satisfied in their established artistic tastes. Later that year, these works were featured in an exhibition at the Gal�rie du Faubourg in Paris. The exhibition caused much scandal, but won few admirers. Soon after, Magritte resigned to his original style, though he bitterly attributed this retroaction to his desire to please Georgette, who preferred his earlier paintings. He continued to acquire much success all over the world with paintings such as L'Empire des Lumi�res (The Empire of Lights, 1954), which employed standard Surrealist techniques and precise Magritte lines. On August 15, 1967, Magritte died in Brussels. Unlike many of his Surrealist counterparts, Magritte lived quite humbly and incon uously. He did not draw much attention to himself, and he lived life relatively uneventfully. Despite his unassuming lifestyle, though, Magritte managed to leave an artistic legacy of transforming the ordinary into the fantastic. While some art historians attribute Magritte's art to his desire to oppose and combat the triviality of everyday life, others suggest that his work goes beyond escapism and serves to reveal some of the murkier and complex aspects of the human condition. Whatever the impetus was for his art, it is certain that Magritte's works are at once hauntingly beautiful and deeply provocative. ...read more.