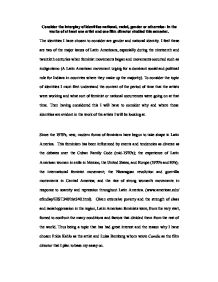 Consider the interplay of identities-national, racial, gender or otherwise- in the works of at least one artist and one film director studied this semester.

Consider the interplay of identities-national, racial, gender or otherwise- in the works of at least one artist and one film director studied this semester. The identities I have chosen to consider are gender and national identity. I feel these are two of the major issues of Latin Americans, especially during the nineteenth and twentieth centuries when feminist movements began and movements occurred such as indigenismo (A Latin American movement urging for a dominant social and political role for Indians in countries where they make up the majority). To consider the topic of identities I must first understand the context of the period of time that the artists were working and what sort of feminist or national occurrences were going on at that time. Then having considered this I will have to consider why and where these identities are evident in the work of the artists I will be looking at. Since the 1970's, new, modern forms of feminism have begun to take shape in Latin America. This feminism has been influenced by events and tendencies as diverse as the debates over the Cuban Family Code (mid-1970's); the experience of Latin American women in exile in Mexico, the United States, and Europe (1970's and 80's); the international feminist movement; the Nicaraguan revolution and guerrilla movements in Central America; and the rise of strong women's movements in response to scarcity and repression throughout Latin America. ...read more.

Other examples of the patriarchal system include when the book keeper tries to sell books against the censor, he is decapitated and his severed head is put on the railings outside the church. Censorship was a very important part of Rosa's regime and anyone who went against the censor would pay the price, Rosas makes sure of this by letting the town know what will happen to them if any1 else tries the same thing. Rosas uses censorship as a means of oppressing the people, to not let them develop their own ideas because if this happens then they will rebel. In the sermon that Ladislao gives after they learn of the news of the book keeper, he talks against the state saying that what they did was unchristian-like. Later when Camila's family sit for dinner and her father and her husband-to-be are criticising what Ladislao has said, Camila tries to support the views of the priest but she is not allowed to give her opinion, this reflects the patriarchal system of the state, where the father is like the dictator, not allowing his people to have freedom of speech. Another sequence that also illustrates the patriarchy society, in reference to home life but also parallel to society as a whole is when whilst sitting at the piano and having a discussion with her father about marriage, Camila's father says she must get married or go to a convent. ...read more.

Next to smoke-belching chimneys are skyscrapers, and by her feet, robotic structures. Contrasting with this image is the thriving vegetation and the Pre-Colombian sculptures that symbolise her nation. The message is clear: the USA equals commerce and the degradation it brings, ultimately display the threat it held to her country. Frida believed that industry was part of Capitalism, and even though Diego Rivera believed in the necessity of technological progress, Frida believed machines to be bad luck and the cause of pain. In both artists we see the interplay of identities, both national and gender. In Bemberg's film, we see that for her gender is more a key concern than nationalism. She intended to show people an Argentines perception of the patriarchal system rights in nineteenth-century Argentina through a love story rather than a political story in this way she engages the audience through their emotions but is also able to convey the idea of the political regime by not focussing on it as a key topic and keeping it in the background of the story. Frida Kahlo on the other hand was not an intense feminist. Although she shows herself to be a strong-willed independent woman through her paintings, her main topic area is of nationalism. Portraying her view on the political situations around her she makes it clear that she not only is a strong independent woman but is also very independent in her views towards her national identity. ...read more.