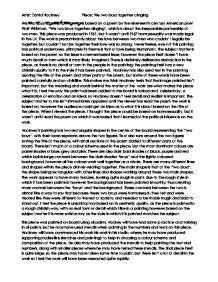 Artist: David Hockney Piece: We two boys together clinging We two boys together clinging is based on a poem by the nineteenth century American poet Walt Whitman, "We two boys together clinging", which is about the inseparable partnership of two men. This piece was produced in 1961, but it wasn't until 1967 homosexuality was made legal in the UK. The work is predominantly about the love between two men who couldn't legally be together, but couldn't not be together their love was so strong. Nevertheless, even if this painting has political undertones, ultimately its theme is that of love being triumphant. The subject matter is based on the poem, so the issue is a remembered issue; however the piece itself doesn't have much detail or form which is most likely imagined. There is definitely deliberate abstraction in the piece, as there is no detail or form in the people in the painting; the painting itself has a very childish quality to it in the style it has been painted. ...read more.

There are also dark bold shades of black, purple and red which builds large contrasts between the dark shades "boys" and the lightly coloured background, however all the colours work well together as a whole. There are many different lines and shapes within the piece all inter-relating together. The main shape is that of the "two boys", the shape being rectangular, with other lines and shapes working around these two main shapes. The work appears to have many textures, looking quite rough in parts due to the rough style in which it has been painted; however the background has been painted smoothly, thus creating more contrast between the "boys" and the background. These contrasts between the two is almost like a way to say that because these two boys were homosexual, they felt and were treated like they were different to the rest of society, and needed to be made rough and bold to stand out. ...read more.

When Hockney produced this piece, homosexuality was still illegal, so I think he wouldn't feel happy, but think about how unfair it is that two people can't be together, but now he can the piece and feel a sense of victory. The piece is quiet and quite sad, as at the time they were unable to be together, but if the piece was made now it would be a much happier piece of work. For me, I feel I am directly affected by the piece as it makes me think about what it would be like if homosexuality was still illegal and how it would feel having to live with that and be in a relationship, but it makes me feel relieved and happy that it isn't the case. I feel there aren't qualities in the piece itself that have affected me, but the meaning and the meaning behind the poem it is based on, making perhaps the poem just as personal to me as the painting itself. ...read more.