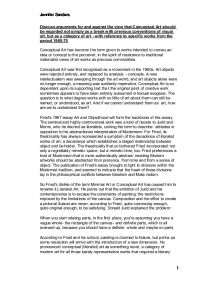 Discuss arguments for and against the view that Conceptual Art should be regarded not simply as a break with previous conventions of visual art, but as a category of art - with reference to specific works from the period 1965-75

Conceptual Art has become the term given to works intended to convey an idea or concept to the perceiver, in the spirit of resistance to traditional materialist views of art works as precious commodities.

Conceptual Art was first recognised as a movement in the 1960s. Art objects were rejected entirely, and replaced by analysis - concepts. A new intellectualism was sweeping through the art world, and art objects alone were no longer enough, a meaning was suddenly imperative. Conceptual Art is so dependent upon its supporting text that the original point of creative work sometimes appears to have been entirely subsumed in textual exegesis. The question is to what degree works with so little of art about them can still be named, or understood, as art. And if we cannot understand them as art, how are we to understand them?

Fried's 1967 essay Art and Objecthood will form the backbone of this essay. The seminal and highly controversial work was a kind of riposte to Judd and Morris, who he decried as literalists, coining the term to describe attitudes in opposition to his abstractionist interpretation of Modernism. For Fried, its theatricality has always represented a symptom of the decadence of literalist works of art, a decadence which establishes a staged relationship between object and beholder. The theatricality that so bothered Fried incorporated not only a regrettably mimetic space, but a mimetic time, too. Fried preferences a kind of Modernism that is more authentically abstract: insisting Modern artworks should be abstracted from pretence, from time and from a sense of object. The publication of Fried's essay brought to light to divisions within the Modernist tradition, and seemed to indicate that the heart of these divisions lay in the philosophical conflicts between Idealism and Materialism.

So Fried's dislike of the term Minimal Art or Conceptual Art has caused him to rename it Literalist Art. He points out that the ambition of Judd and his contemporaries is to escape the constraints of painting: the restrictions imposed by the limitations of the canvas. Composition and the effort to create a pictorial illusion are never, according to Fried, quite convincing enough, quite original enough, to be satisfying. Donald Judd explained the problem:

When you start relating parts, in the first place, you're assuming you have a vague whole- the rectangle of the canvas- and definite parts, which is all screwed up, because you should have a definite whole and maybe no parts

According to Fried and his school, painting is doomed to failure, but perhaps some resolution will arrive with the introduction of a new dimension. He pronounced conceptual (literalist) art as something novel, a category of modern art for all those barely representative works that required a literary back up. In practice, the new dimension brings with it a new focus on the relationships within the work. Judd refers to the relational character of his sculptures as their anthropomorphism, speaking of the correspondence between the spaces he creates, and both Judd and Morris are concerned with unity, completeness, creating a perfect shape capable of overwhelming the fragmentary components.

In many ways nothing has physically changed in sculpture since the 1960s. There seems to be a constant effort to relate parts in Catherine de Monchaux's recent sculpture, although her work, unlike Judd's, is more obviously and shameless anthropomorphic in its forms. Her structures appear to be based on the human body, and her titles are like the titles of poems or fairytales. Wandering about in the future, looking forward to the past is virtually surrealist, it seems arbitrary to call this minimalist when the emphasis is not clearly on objects declaring the status of their existence, but instead on some fantasy story. Never Forget seems to be about memories, the past, things being opened up, revealed and mapped out in a symmetrical and rather beautiful way. Both these works are concerned with the impossible project of re-membering, putting things back together from their parts- and the contrast with Judd is clear- to the extent that they are about parts being reassembled into an ideal whole, de Monchaux's sculptures are more like paintings. In many ways, her work resembles Carl Andre's- particularly his Venus Forge.

The viewer's experience of the work will obviously depend on whether the work is perceived as an object or a subject. This repeats the problem of categorizing conceptual art. From the object's perspective, a new category of art has been created through Conceptualism, situating it in a new historical milieu. From the viewpoint of the subjective viewer, perhaps, such categories are irrelevant, but even the layman must be aware of a mute subject matter hinting at a break in convention, thus placing new emphasis on meaning. In Fried's conception, the art object becomes animated and serves the holistic aspiration of the artist. But the art work's subjectivity does not elevate the artist- they have created an object capable of representing itself, and, like Frankenstein observing his monster, are themselves both the observers and observed.

If Hesse is, as her diaries suggest, a woman observing herself, then she has an immediate affinity with Judd. Both artists are engaged in a project of self-replication, where sculpture is an extension of themselves- something projected into space, imbued with some kind of life, in the words of Chav and Fried, written into existence. Fried's idea can be read as gender-neutral, but the phallocentric commentaries of feminist writers such as Camille Paglia

Hesse's feminist works can be read with a melancholic tone of a woman conscious of and raging about a sexual debt -but they do not have to be. Paglia finds male and female equality in Eastern religious traditions: cultures built around ongoing horizontal natural rhythms, unlike the western male preoccupation with vertical climax. Hesse's interest in the body is, in Paglia's terms. chthonic- she claimed she wanted to keep her work in the ugly zone, her work defined by Stallybrass as all orifices and symbolic filthphysical needs and pleasures of thesexual organs. So while Hesse works almost unconsciously as a woman, in the most natural and inevitable way finding affinity with the dirty reality of natural processes, she does not necessarily work with an agenda to liberate women- at least not through the symbolism she employs. She is not seeking illusory freedom in creating an alternative heterocosm through sculpture- she is merely expressing what is going on inside her, writing the body.

Paglia's vision of the wholeness of femininity is irresistibly connected to Fried's emphasis on shape, what secures the wholeness of the object is the singleness of the shape. In order for a work to qualify as a painting it must, Fried says, hold a shape.Without form, it is experienced as an object. Modernist painting's mission was to stave off accusations of objecthood, and to retain shape- character- persona. Minimalist (literalist, Conceptual) art, on the other hand, embraces its objecthood and strains to project it at every opportunity. It is not concerned about movements or history, social context or categorization - merely with the emphatic declaration of its authentic self; its materials; its construction.

Conceptual art, for Fried, is a new genre of theatre and includes the beholder. However, a new genre of theatre, to the extent that theatre is an art, reinforces the idea that Fried is declaring conceptual art as a whole new category of art. I have chosen Hesse as an example, because her work spans a period of decades leading up to the present, and it is important to frame our question in its historical context. Watching how conceptual art has (or rather, has not) changed in nature over the past forty years informs our judgement of its impact. Hesse has always experimented with conceptual work, and Fried's theory holds true for her - there is certainly something implacably theatrical about this artist's sculpture, the in-jokes, the sexual punning, the scale. There is also an inescapable recurrence of the void as a symbol. While it's tempting to class all holes as signifiers of feminine anxiety or unsatisfaction, it may not always be terribly helpful. Hang Up, for example,is not even a real empty canvas- it's been beautifully painted, just all in one colour. It lurches out at us with its alien grayness, the passage of time and its monocrome simplicity lending it an amateur dramatics eeriness, this is no painting. It is a textbook example of Fried's notion of theatrical sculpture, and an example so clearly handmade that it recalls other hand crafted art works, and by extension a dozen other women artists- and raises the point that perhaps Fried's theatricality theory is extraordinarily effective with female artists after all. It certainly helps to spin the boy's club character of 60s minimalism- if craft and animation invokes the feminine and can be imposed or unveiled in the most surprising places, due to a theory, then this theory must have some value as a gender-leveling power. Simplifying the way an object is understood Fried does, abstracting the meaning from the object then returning it to it, makes gendered readings impossible. Fried allows art works to proclaim their own meaning, but less esoteric critics, perhaps more Marxist ones such as T.J Clarke, never returned the meaning to the art object: the objecthood in itself was nothing without context. It is these historicist art critics who see all art as abstracted until contextualized - who believe conceptual art is the most extreme and intolerable form of abstraction, and who believe it represents a slightly troublesome break from convention but nothing that cannot be subdued with some thorough historical context.

For many, the term Conceptual Art, like Modernism, suggests more of an attitude than a category with strictly defined limits. Minimalism might have been "the last great modernist movement", 1973 the year modernism died and post-modernism ushered in, but none of this really helps us to understand how to read art, or why certain kinds of objects are made in certain ways. Ultimately, labelling art as a new category seldom teaches us much more than how to label art. As one commentator stated (of music),

Just because something sounds crunchy and angular doesn't mean it is modern.

Yet in one sense he is wrong - modern, like conceptual is a term that can be applied according to individual interpretation, the subject/object problem again. There is a strong case for the argument that conceptual art was tagged retroactively by supporters of the literary elite imposition of meaning on abstract works, but there is a more intuitive one still that suggests all art is open to classification as conceptual, nullifying the movement as a historicist ploy and returning power to the viewer. Even Fried's extraordinary theories are somehow conceptual as he asks us to read all art objects through the filter of a vocabulary of objecthood. Similarly which argument one chooses to follow up is, of course, a subjective matter.

Fried, M. Art and Objecthood University of Chicago Press, US (1998)