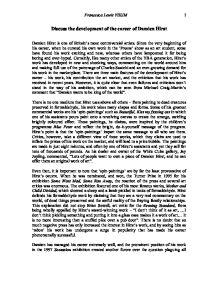 Discuss the development of the career of Damien Hirst

Discuss the development of the career of Damien Hirst Damien Hirst is one of Britain's most controversial artists. Since the very beginning of his career, when he curated his own work in the 'Freeze' show as an art student, some have found his work exciting and new, whereas others have lampooned it for being boring and over-hyped. Certainly, like many other artists of the YBA generation, Hirst's work has developed in new and shocking ways, commenting on the world around him and making full use of the patronage of Charles Saatchi and an ever-growing demand for his work in the marketplace. There are three main features of the development of Hirst's career - his work, his contribution the art market, and the criticism that his work has received in recent years. However, it is quite clear that even failures and criticism won't stand in the way of his ambition, which can be seen from Michael Craig-Martin's comment that "Damien wants to be king of the world". There is no one medium that Hirst uses above all others - from painting to dead creatures preserved in formaldehyde, his work takes many shapes and forms. ...read more.

It is no more interesting than a stuffed pike over a pub door". There is no doubt that so much negative press has only increased the interest in Hirst's work, and by seeing him as 'taboo' his work has undergone a surge in popularity that has made his career phenomenally successful. Damien has managed his career extremely well, and the prominent position of his work in the 1997 Sensation exhibition created another furore over the question plaguing all critics of Hirst - 'is this art?'. Some of the works shown in the exhibit were examples of his 'preservation technique', for example, his many-dissected cow which he rather mockingly titled Some Comfort Gained from the Acceptance of the Inherent Lies in Everything, contrasted with his mechanical rows of dots, depicting brightly coloured pills on a blank white canvas (Argininosuccinic Acid, 1995). Hirst's fascination with pills and other prescriptive medicines was part of the reason for his most ambitious project - the opening of a restaurant in Notting Hill called Pharmacy. In many ways, Pharmacy was the biggest failure in Damien Hirst's entire career thus far. ...read more.

Jay Joplin springs to the defence of his prot�g�, saying that the huge media interest in Hirst is due to his constant re-invention of the art form, and praising the qualities of Hirst as a "savvy businessman" striving to create the supply in response to the demand for new and original pieces. Some have used this business-like regard for his work as a valid criticism for the cheapening the intrinsic value of the art, as The Sunday Times noted "If Hirst is notable for anything, it is for finally severing the link between the "artist" and the person who actually...colours in the dots". It is clear that the work and the career of Damien Hirst causes some kind of reaction in anyone remotely interested in the post-modern cultural development of Britain. His controversy remains his greatest asset, pushing prices of his work ever higher. There is no question that he will continue to push for more and more success, and the only foreseeable obstacle is that one day, the ideas might run out. ?? ?? ?? ?? I Francesca Lewis VIIIJM ...read more.