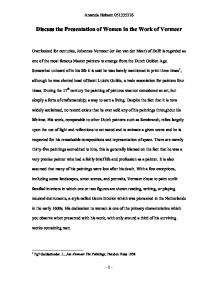 Discuss the Presentation of Women in the Work of Vermeer

Discuss the Presentation of Women in the Work of Vermeer Overlooked for centuries, Johannes Vermeer (or Jan van der Meer) of Delft is regarded as one of the most famous Master painters to emerge from the Dutch Golden Age. Somewhat unheard of in his life it is said he was barely mentioned in print three times1, although he was elected head of Saint Luke's Guilde, a trade association for painters four times. During the 17th century the painting of pictures was not considered an art, but simply a form of craftsmanship; a way to earn a living. Despite the fact that it is now widely acclaimed, no record exists that he ever sold any of his paintings throughout his lifetime. His work, comparable to other Dutch painters such as Rembrandt, relies largely upon the use of light and reflections to set mood and to animate a given scene and he is respected for his remarkable compositions and representation of space. There are merely thirty-five paintings accredited to him, this is generally blamed on the fact that he was a very precise painter who had a fairly brief life and profession as a painter. ...read more.

For example In Love Letter shows a girl with a letter looking up at her maid, the instrument in her hand affirms the subject of love and one of the paintings on the wall of a boat at see suggests that her partner is away; that it is he who has sent the letter. The second image displays a lone rambler in a peaceful setting, an indication of a severance of lovers and an aspiration for reunion. This is reflected in Lady Reading a Letter at an Open Window, wherein the young woman is standing before an open window and reading a letter. As is commonplace in the artist's paintings; the window discloses no sight of the outside world, the female figure's consequential seclusion within the enclosed interior is a symbol of being alone, of loneliness. The fact that her gaze travels far to the assumed horizon displays her yearning for something or for someone; the man who wrote the letter. Social stature of the women illustrated is indicated by the objects which surround them, which also serve to enhance the character you imagine for her. ...read more.

Nevertheless, if indeed the female figure in many of his paintings is his wife, this would account for the speculation whether or not the figure is pregnant. This is for the reason that, during their twenty-two years of marriage Catherina bore him fifteen children, and therefore was almost always with child. In Dutch art, literature and music of the period, themes of love were among the most common, attracting a wide audience of both women and men. It may be observed in paintings such as Girl with a Wine Glass that Vermeer was conforming to the current fashion, however his style and lack of conventional female beauty does not.. Vermeer's versions of womanhood subtly register complex social forces, but they often do so by countering gender instabilities. Vermeer's work makes maidservants remarkable in their own right, these convincing representations of socially humble women indicates his understanding of class distinctions. The facial expressions and gestures made by Vermeer's women are crucial to his construction of their femininity. He has evidently observed human mannerisms and has thus positioned his women in simple, yet believable poses of habitual human activity. ...read more.