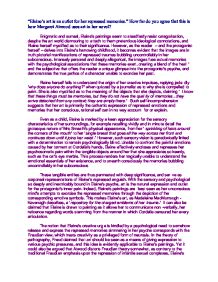 &quot;Elaine's art is an outlet for her repressed memories.&quot; How far do you agree that this is how Margaret Atwood uses art in her novel?

"Elaine's art is an outlet for her repressed memories." How far do you agree that this is how Margaret Atwood uses art in her novel? Enigmatic and surreal, Elaine's paintings seem to steadfastly resist categorisation, despite the art world clamouring to attach to them pretentious ideological connotations, and Elaine herself mystified as to their significance. However, as the reader - and the protagonist herself - delves into Elaine's harrowing childhood, it becomes evident that the images are in truth pictorial manifestations of repressed traumas bubbling uncontrollably in her subconscious. Intensely personal and deeply allegorical, the images fuse actual memories with the psychological associations that these memories exert, creating a blend of the 'real' and the subjective that offers the reader a unique glimpse into the protagonist's psyche, and demonstrates the true pathos of a character unable to exorcise her past. Elaine herself fails to understand the origin of her creative impulses, replying jadedly 'why does anyone do anything?' when quizzed by a journalist as to why she is compelled to paint. She is also mystified as to the meaning of the objects that she depicts, claiming 'I know that these things must be memories, but they do not have the quality of memories...they arrive detached from any context; they are simply there.' Such self-incomprehension suggests that her art is primarily the cathartic expression of repressed emotions and memories that her conscious, rational self can in no way account for or explain. Even as a child, Elaine is marked by a keen appreciation for the sensory characteristics of her surroundings, for example recalling vividly ...read more.

Smeath and Cordelia. In Three Muses the figures whom helped Elaine in childhood all hold spherical objects resembling the marble, representing their protective roles. It is appropriate that in Elaine's final painting, Unified Field Theory, the protective talisman is held near the heart of the Virgin Mary, who is also inextricably bound in Elaine's psyche with notions of protection and survival. Elaine attempts to paint her many times, trying to embody the image that she believed ensured her survival in the ravine. The Virgin is depicted as a lioness, 'fierce, alert to danger, wild,' and also as a typical mother of the 1940s, 'wearing a winter coat over her blue robe...carrying two brown paper bags full of groceries.' In this sense, a comparison is drawn between her and Elaine's mother, who in Pressure Cooker is shown to dematerialise, become insubstantial, almost certainly as a result of her failure to support Elaine through the bullying. The metaphors of heart and cat's eye are effectively twinned, and twinship itself is an allegory within Elaine's art. Half A Face, the only picture of Cordelia, demonstrates the inextricability of Elaine and her enigmatic nemesis. Another face is behind Cordelia's, draped in a white cloth, whilst Cordelia herself is 'tentative, hesitant, reproachful-' a mirror of all Elaine's childhood emotions. The title also implies that the women are somehow indistinguishable, with the constituent parts of both 'Elaine' and 'Cordelia' needed to create a cohesive whole. Metamorphosis is another key theme found in the protagonist's art. ...read more.

Not all the art mentioned in the novel is cathartic, and two other distinct motivations for artistry emerge. Jon's 'pure painting' exemplifies the idea of creativity for its own sake, whilst Elaine's feminist contemporaries engage in propagandist, confrontational art, designed as an affront to the patriarchal ideology of the establishment. Elaine herself feels incongruous with the art world. Although admitting, 'I feel I should admire these paintings, because I'm incapable of painting that way myself,' Elaine secretly dislikes the majority of Jon's work, and her sardonic, barbed comments in the narrative (of Jon's abstract paintings she remarks 'I've seen things like this beside the highway, when something's been run over') reflect a bemusement with the innovative techniques practised by the new cohort of conceptual artists. Likewise, Elaine's relationship with her feminist contemporaries is largely ambivalent, corresponding to her attitude towards the ideology as a whole. She is slightly envious of the zest and enthusiasm of the women with whom she exhibits, claiming that their art 'yells defiance,' and evidently derives a certain sense of pride from the hostility of reactionaries, saying 'paintings that can get bottles of ink thrown at them...must have an odd revolutionary power.' Yet Elaine's internalised suspicion and hostility towards women, derived from her traumatic experiences at their hands, combined with her natural understanding of - and sympathy for - men, render her unable to fully subscribe to a movement based around female solidarity. She admits 'I know I am unorthodox, hopelessly heterosexual, a mother, quisling and secret wimp....I am like someone watching from the sidelines, waving a cowardly handkerchief, as the troops go boyishly off to war. ...read more.