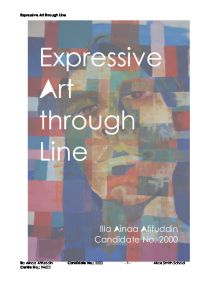 Line &quot; the essence of art, the language of free expression.

"Line - the essence of art, the language of free expression." - Foundations of Art & Design, Lois Fichner-Rathus, 2008, Thomas Wadsworth, Belmont, CA Line is one of the basic elements in art as it is one-dimensional and can differ in terms of width, length and direction. It is used in various ways; straight or curved, thick or thin, horizontal, vertical or diagonal therefore can be used to create form. Line can be used to help the eye to see around the compositions and somewhat convey a story or message. Line is used everywhere in our lives. We can see it in everything from dirt to the sky. This essay will study the use of Line in Expressive Art because it is believed that line is one of the best elements used by any artist to express their feelings, emotions onto an artwork. It will study the different art movements that elaborate expressiveness through various techniques and media. In art, expression and line are fundamentally linked. With no expression, the Line we draw would mean nothing as Line are created through the connection of points and are defined as the side-by-side placement of an infinite number of points. In other words, line is infinite; line has no endpoint, and is ever going. The length of the line may become longer if the point moves on. However, a line has no measureable size because they have no width. Therefore, for Line to perceive in the world of arts, it must have a width as well as length. Therefore, in art, a point - which has no measureable size, becomes a dot - which has a measurable size. Thus in art, Line is a moving dot so when you put a point of an instrument to a surface, move your hand and your results is a line. Line may actually be the gaps in stratified rock or fissures in a complex crystal or even in the veins in the leaf or the rings of a tree. ...read more.

Beardsley continued to draw controversial illustrations of eroticism, corruption and depravity. Beardsley's illustrations were highly detailed from the landscape of trees to the strains of the hair of a person. He did challenge the traditional ways of painting by using Indian ink, keeping it black and white and using the idea of decorations into art. In comparison to Beardsley's 'refine' drawings, Vincent Van Gogh (1853 - 1890) may be one of the best example artists who use linear qualities to express ones feelings. Van Gogh obsessed with religion and social service was a misfit during his childhood days. In 1886 he discovered the Post-Impressionist in Paris and found his style in painting. He switched from dark to bright colours, and social realist to outdoor scenes. In Van Gogh's 'Starry Night', the brushstrokes are clearly seen to be the linear quality of the painting. It is seen that the brushstrokes have been 'agitatedly' painted on and full of passion and rhythm. Unlike Beardsley who creates controversy illustrations, Van Gogh's sufferings and pain is clearly seen in his swirling brushstrokes. It is somewhat ironic that Van Gogh produces a painting that at first appears to be peaceful and restless. Yet as we study more into the painting, we discover that the swirling Line shows Van Gogh's frustrated thoughts in life and his desperation. What makes this painting very unique is the direction of the strokes of the paintings. If we focus around the area of the swirling clouds, it can be seen that Van Gogh exaggerates the thickness of the brush strokes Line to indicate the movement of the clouds. The eye would be following the same direction of the Line that is stirring the starry night. The red and blue arrows demonstrate where the Line is being focused around. This allows viewers' eyes to be left wondered throughout the painting. Following the curves and singling out the stars as they are being joined dot-to-dot. ...read more.

Like the futurist artist, Duchamp uses lines to illustrate the motion of a person walking down a stairs. Although certain aspects of the body were shaped into geometric patterns, it only makes the composition seem more constructed. The aspect of line here is used to convey the dynamism something so simple such as walking down the stairs, can be painted into something that appears so complex. Note how Duchamp use of lines that he makes them repetitive which again helps emphasise the idea of motion and constructive style. The repetitions of line creates such complexity and layering that it displays such a structuralise concept. The diagonal line helps create the painting to appear more energetic and explosive and thus helps highlights the motion in progress. From 1874's Impressionism to the current 21st century's contemporary art, the use of Line has changed and artist challenges the purpose of line. Looking at centuries of art, line has always been used in every single way possible. It is without a doubt one of the fundamental elements in art. It is seen that through centuries of art, line has been used and convey through various aspects. Some of which are obvious to spot, and others are not so obvious. Line helps convey any emotions by merely drawing a straight line, scribbles, or broken line. It can be perceived as a statement regarding a movement, or a guideline to help the viewers look within a painting. With repetitions of line, the composition is seen to be in motion thus created the futurist movement. With Dali's perspective of lines, it only creates the idea of time and how we, the viewers are only attracted to it. With delicate flowing details of flowers or merely a portrait, the art nouveau were able to create such highly detailed decorations. Simple lines can also be seen as something so complex and chaotic. Through many centuries, line is established as the essence of art. It is the language of freedom, the ability to express oneself freely. ...read more.