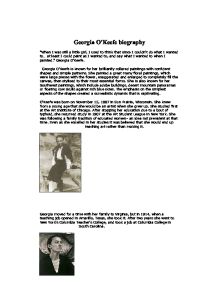 Georgia O'Keefe biography "When I was still a little girl, I used to think that since I couldn't do what I wanted to... at least I could paint as I wanted to, and say what I wanted to when I painted." Georgia O'Keefe. Georgia O'Keefe is known for her brilliantly collared paintings with confident shapes and simple patterns. She painted a great many floral paintings, which were large pieces with the flower, exaggerated and enlarged to completely fill the canvas, then stylised to their most essential forms. She is also known for her Southwest paintings, which include adobe buildings, desert mountain panoramas or floating cow skulls against rich blue skies. The emphasis on the simplest aspects of the shapes created a surrealistic dynamic that is captivating. ...read more.

Georgia O'Keefe's friend Anita Pulitzer was taken by O'Keefe's works and took some samples to show Alfred Steiglitz at the 291 Gallery in New York. Some sources say that she did so without O'Keefe's permission. Steiglitz was a respected Gallery curator and artist himself, and O'Keefe respected his opinion, but even though he loved them it took some negotiations with O'Keefe to convince her to let him exhibit her work. O'Keefe returned to Texas and worked at the West Texas Normal College while painting the scenes she loved, and hiking the Palo Doro Canyon. An illness caused her to quit her job- or perhaps it was her radical political views clashing with her colleagues. In any case, she returned to New York at Alfred Steiglitz's urging. ...read more.

She purchased a hacienda at Ghost Ranch, New Mexico and it became her lair for much of the remainder of her life. Her eyesight began to fail in the early seventies and by 1972 she could no longer see well enough to paint. A young man named Juan Hamilton, a potter, came to do odd jobs for O'Keefe and ultimately became her closest companion in her later years. Many felt he was using her for his own ends, but O'Keefe liked him and he stayed. She even did a bit of pottery herself while knowing him. At the very end of her life she moved to Santa Fe, New Mexico. It was there that she died in 1986 at the age of 98. She was cremated the next day and Juan Hamilton scattered her ashes from Paternal Mountain as she had requested. ...read more.