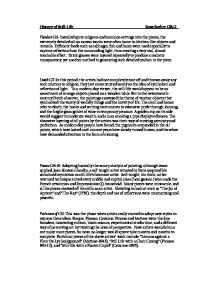 History of Still-Life Ross Barber 12Be2 Flanders C16- Installed quite religious and common settings into the pieces, the extremely detailed oil on canvas works were often home to kitchen-like objects and utensils. Different foods such as cabbages, fish and hares were used especially to capture reflection from the surrounding light, thus creating a very real, almost touchable effect. Drink glasses were layered repeatedly to produce a realistic transparency; yet another method in generating such detailed realism in the piece. Dutch C17-In this period, the artists had not completely cast off and thrown away any such relation to religion; they just concentrated sorely on the idea of symbolism and reflection of light. ...read more.

The obsessive layering of oil paints by the artists was their way of creating accuracy and perfection. As modern day people have found, the pigments suspended in the oil paints, which have lasted until current years have slowly turned brown, and therefore have demanded attention in the form of cleaning. France C18-19- Adopting basically the same principle of painting, although lesser applied, Jean Sim�on Chardin, a self taught artist situated in Paris acquired his acclaimed reputation as still life's foremost artist. Self-taught, his thick, rather textured technique suited every middle and capital class (bourgeoisie (who made the French revolution and Impressionism)) household. Many pieces were minuscule, and all his pieces showed off his skills as an artist. ...read more.

Particular pieces of the above artists' work include: "Lemons against a Fleur De Lys background" (Matisse-1943), "Still Life with a Chair Caning" (Picasso 1911-12), and "Still-life with a Plaster Cupid" (Cezanne-1895). 1960's- Preferring to intermingle categories/ genres, artists such as Patrick Caulfield began to look at interiors and urban living. Broadening the situation by including architectural aspects. Caulfield in particular used postcards for his source of inspiration and reference throughout, this allowed him to mix and link the different styles together. He also included reference to the modern way of living, and used bold shapes, colours, and forms. His effectiveness in formalising the fact of interior light was Caulfield's way of portraying false romance and space. Paintings now took on the form of prints because of the Pop art movement, and they were now sold to museums and exhibition, and therefore less to the general public. ...read more.