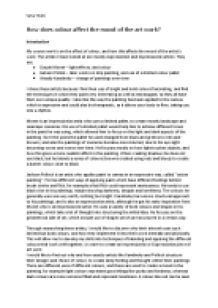 How does colour affect the mood of the art work? Examination of paintings by Monet, Pollock and Kandinsky.

﻿Sahar Malik How does colour affect the mood of the art work? Introduction My course work is on the effect of colour, and how this affects the mood of the artist?s work. The artists I have looked at are mostly expressionist and impressionist artists. They are: 1. Claude Monet ? light effects, and colour 2. Jackson Pollok ? later works on drip painting, and use of a limited colour pallet 3. Wassily Kandinsky ? change of paintings over time I chose these artists because I find their use of bright and bold colours fascinating, and find the techniques in which they paint very interesting as well as extravagant, as they all have their own unique quality. I also like the way the painting has been applied to the canvas which is expressive and could also be therapeutic, as it allows your body to flow, taking you into a rhythm. Monte is an impressionist artist who uses a limited pallet, to create mostly landscape and seascape sceneries. His use of a limited pallet would help him to achieve different tones in the paint he was using, which allowed him to focus on the light and dark aspects of the painting. Over the years the pallet he used changed from blues and greens to reds and browns, and also the paintings of sceneries became more blurred, due to his eye sight becoming worse and worse over time. He focuses mostly on how light touches objects, and how this gives a more realistic affect in the painting. When creating shadows he does not use black, but he blends a series of colours (browns created using reds and blues) to create a darker colour close to black. Jackson Pollock is an artist who applies paint to canvas in an expressive way, called ??action painting??. He has different ways of applying paint which have different feelings behind brush stroke and flick, for example a fast flick could represent anxiousness. ...read more.

Painting and art is therapy for allot of people, it helps you get away from the stresses of life. Pollock suffered from alcoholism for the majority of this life, his personality was volatile, and as a result of this he died very young at the age of 44. Pollock earlier works from the 1940 were influenced mainly by Pablo Picasso, as his early paintings were much brighter and vibrant because of the use of colour, that the ones done in his later life, where he was introduced to drip painting, which was done using liquid paint in 1936, at a experimental workshop in new York, by an artist named David Alfaro Siqueiros. Many people say that Pollock?s work should not be as highly regarded as it is, because it?s just paint being thrown onto a canvas using a stick. But if you look closely into the canvas you can see that under all the paint there are words, letters, numbers, and sometimes even his name written in capitals. So behind all these layers of paint there is a deep understanding that people are trying to achieve. Autumn Rhythm: Number 30 (1950) Fig 4. Autumn rhythm like other paintings by Pollock is started with lines fob black diluted paint, which soak right through the canvas. Then over this he applied more skeins of paint in different colour, but always keeping the colour limited. When painting my artist use different brush strokes to achieve different looks, but Pollock focuses more on the drips, and types of lines he uses. They could be short or long, thick or thin, or even light or dark. To create each line he used a variety of tools going from the normal paint brush to using sticks and knives. Autumn rhythm is an early example of abstract impressionism by Pollock. In this he seems very irrational in his ideas and new style of abstract painting. ...read more.

The colour Kandinsky uses does have an influence on the viewer?s mood. The more vibrant colours he used, it had a more atmospheric approach like you knew where you were. In his later work the colours started to die out slightly, ad he took on a geometrical approach. This did involve colours, which made some areas of the painting stand out, which was a sign by Kandinsky that that area was the centre of the painting. I an going to do a investigation to see how I can take natural forms in nature and change them in to geometrical forms using shapes and lines and colours. And I will show how I made the transformation from and ordinary view of a landscape to a geometric approach. Conclusion I have discovered that all artist use colours in different ways, sometimes to express different feelings and other times to show the true reality of the world. The colours used do affect the mood of the view and changes their reaction to the painting. I have discovered that painting that use more vibrant colours have a generally positive feel to them. But in darker one you feel a sense of mystery within the painting. Jackson Pollock?s work defiantly answered the question as you can tell through the way he expresses himself throughout the art work, and the colours he uses, show his feelings and thoughts. We know that he was an alcoholic which may be the reason behind the dark and earthy colours he uses in his paintings. Monet?s work also shows hoe colour is used in the context of light, showing how lighter and darker colours can be used to create mood in the painting. Kandinsky?s work varied through his time period from going from more vast and vibrant to more geometrical and linier. Overall the colour of works do generally affect the mood of whoever sees the painting, but we cannot determine this for all people as different people have different personalities and view which may change their perception of the painting. ...read more.